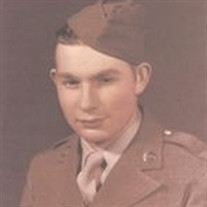 Willis Frank Wambolt, age 85, passed away peacefully on Saturday, May 29, 2010. Willis was born to George and Jessie (Homan) Wambolt on June 12, 1924, in Centralia, Washington. He was the youngest of three children, Bessie Wambolt and Irvin Wambolt. All have proceeded him in death. He is survived by his wife of 63 years, Betty Wambolt and two sons, Frank Wambolt (Cindy) and Dale Wambolt. He is survived by five grandchildren, Randy Wambolt and Spencer Wambolt (Meredith), Sara Hrouda (Brett), Christopher Davis, and Jacob Dudley and three great-grandchildren, Haleigh and Reese Wambolt and Logan Hrouda. Also surviving is brother-in-law, Harold DeWeese (Edie) and children, also surviving him are his nieces and nephews, Dick (Erma) Wambolt, Cynthia Wambolt, Janita Pulley and Steve Wambolt (Tammy) and their children. Willis was a long time member of the Loyal Order of Moose, a member of the American Legion and the Lumber and Sawmill Workers 2949. Willis retired from Roseburg Forest Products in 1986, after working 36 years as a Bulldozer Operator. Willis served his country during World War II in the South Pacific and was in 110th Engineers Battalion and the 788th Tank Battalion. Willis was in the invasion of Leyte, Philippine Islands and the invasion of Okinawa. At the end of the war he was with the occupation forces in Korea. He received an honorable discharge in 1946 as a Staff Sergeant. His decorations and his citations were the American Theatre service medal, Bronze Service Arrowhead, the Philippine Liberation Medal, two Bronze Stars, the Good Conduct Medal, the Asiatic service Medal Victory Medal. He also had badges issued for first class gunner and second class gunner, mechanic, expert sub-machine gun and sharp shooter carbine. His military occupation specialty was Bulldozer Operator. Willis and Betty were married in November 1946 and in 1948 they moved to Roseburg, where they lived until 1964 when they moved to the Glide area until 1979. They then moved back to the Roseburg area where they lived since then. Willis loved to hunt and fish spending time in the mountains in search of the big buck or along the N. Umpqua River casting his line. A visitation will be held on Friday, June 4, 2010, from 4 p.m. until 7 p.m. at Wilson's Chapel of the Roses. Funeral services will be held at the Chapel of the Roses on Saturday, June 5, 2010, at 1 p.m. with burial being in Castle Rock, Washington. In lieu of flowers please make donations to Moose Charities, P.O. Box 6005, Carol Stream, Illinois 60197-6005 or a charity of your choice.

Willis Frank Wambolt, age 85, passed away peacefully on Saturday, May 29, 2010. Willis was born to George and Jessie (Homan) Wambolt on June 12, 1924, in Centralia, Washington. He was the youngest of three children, Bessie Wambolt and Irvin... View Obituary & Service Information

The family of Willis Frank Wambolt created this Life Tributes page to make it easy to share your memories.

Send flowers to the Wambolt family.