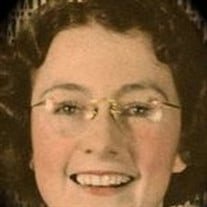 Virginia Walter passed away Friday, May 29, 2009 at a local Alzheimer's care facility. Virginia Jones was born November 26, 1915, in Trinidad, Colorado, the first child of John E. (Casey) Jones and Lola Williams Jones. When she was 18, her family moved to Oregon, where she graduated from high school in Salem. The family was always musical, and played for local dances wherever they lived. Casey played many instruments, including the guitar and saxophone, and Lola played the piano, a skill which she passed on to Virginia. After moving to Roseburg in the 1930s, Virginia met another musician, Gilbert (Gib) Walter, who was the chief engineer at radio station KRNR. They were married in 1938. He was a violin player, and the couple enjoyed making music together. They played for community dances, and also enjoyed playing classical violin and piano pieces together at home. In the 1940s Gib and Virginia moved to Klamath Falls, where their daughter Lana was born in 1948. In the early 1950s they returned to Roseburg, where Virginia busied herself teaching piano lessons to many local children and adults. Virginia had many interests. She loved oil painting and enjoyed painting pictures of the places she and Gib visited as they explored Oregon. She also enjoyed making jewelry from the stones that she and Gib picked up on the beaches and in the mountains. She knitted, did macrame, and read many, many books. She enjoyed photography and loved to take photos on their trips. She loved caring for the plants in her yard, especially the roses. She was always interested in the Spanish language, so she took classes and studied Spanish books. She looked for any opportunity to speak Spanish to people. In the 1990s she got a computer and enjoyed writing some of her childhood memories of Trinidad, and also e-mailing friends and family. After Gib died in 1995, Virginia lived on in their home until macular degeneration and Alzheimer's disease made it difficult for her to manage her life. She reluctantly moved into an assisted living facility, but even though she regretted the loss of her independence she enjoyed the community, and she entertained almost every day at the piano before dinner. Her hands knew where to go on the keys even if her eyes couldn't see. She played many tunes from the 1930s and 40s that the residents enjoyed hearing. Virginia is survived by her daughter Lana Graff and son-in-law Peter Graff of Roseburg, her brother James Rexford Jones, and numerous cousins and nieces. She was preceded in death by her husband Gib and her sister June. The family wishes to extend profound gratitude to the caring staff and families of Callahan Village and Callahan Court, whose extraordinary efforts added so much quality to Virginia's final years. Wilson's Chapel of the Roses are handling the arrangements.

Virginia Walter passed away Friday, May 29, 2009 at a local Alzheimer's care facility. Virginia Jones was born November 26, 1915, in Trinidad, Colorado, the first child of John E. (Casey) Jones and Lola Williams Jones. When she was 18, her... View Obituary & Service Information

The family of Virginia Walter created this Life Tributes page to make it easy to share your memories.

Send flowers to the Walter family.