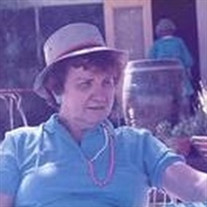 Viola (Vi) Jane Wilborn-Lewis Of Roseburg, Oregon, gently passed away at age 91, surrounded by her family on Tuesday, August 2, 2011. When she passed she was holding her youngest son's hand, gently squeezed it, and raised their hands together... View Obituary & Service Information

The family of Viola Jane Wilborn-Lewis created this Life Tributes page to make it easy to share your memories.

Send flowers to the Wilborn-Lewis family.