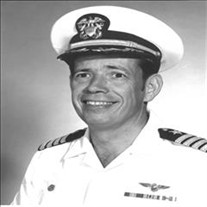 Capt. THOMAS ROBERT MURRAY, USN Retired, was born on December 30, 1935 to Bess and Richard Murray in Santa Barbara, California, the younger of two sons. Tom graduated from Bell High School and the University of Southern California with a degree in International Relations. He was a member of the Naval ROTC unit. Commissioned as an Ensign in August of 1957 and was sent to Pensacola, Florida for training as a Naval Aviator. On December 22, 1957 Ens. Thomas R. Murray, USN married Kay Marie Haggart at Grace Lutheran Church in Bell, California. Their military life together spanned 25 years until Tom’s retirement in 1982. Their first duty station was Pensacola, Florida where tom was designated a Naval aviator and received his Navy wings of gold in March, 1959. He received orders to Patrol Squadron 5 and they moved to Jacksonville, Florida where their son, Thomas Geoard was born in July 1959. Their daughter Tammy Marie was born in California in July 1962. Tom had two tours at the Naval Postgraduate School in Monterey where he received a BS degree in Meteorology and a MS degree in Computer Systems Management. Additional tours of duty included Rota, Spain, two tours on Guam; Viet Nam aboard the Carrier USS Ranger; San Diego and Hawaii. Tom was commanding officer of the Naval Weather Service/Joint Typhoon Warning Center on Guan and the Naval Weather Service Facility on North Island, San Diego, California. Tom retired from the Navy in October 1982 and the couple settled in Roseburg, Oregon. Their retirement years were spent traveling via their motorhome and on cruise ships to various parts of the world and spending the winter months in Arizona. Tom also enjoyed repairing antique clocks, making wine and gardening. Survivors include his wife of 65 years, Kay; their son Tom of Riddle, Oregon; daughter Tammy Schnabel and her husband Gary of Salem, Oregon. Services with Military Honors will be held Tuesday, June 14, 2022 at 3:00 pm at Roseburg National Cemetery followed by interment and a memorial service led by Pastor Reich of St. Paul Lutheran Church. In lieu of flowers the family requests that contributions be made to the American Cancer Society. Wilson’s Chapel of the Roses is in charge of arrangements.

Capt. THOMAS ROBERT MURRAY, USN Retired, was born on December 30, 1935 to Bess and Richard Murray in Santa Barbara, California, the younger of two sons. Tom graduated from Bell High School and the University of Southern California with a degree... View Obituary & Service Information

The family of Thomas R. Murray created this Life Tributes page to make it easy to share your memories.

Send flowers to the Murray family.