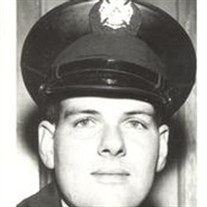 Sylvan "Gene" Long, 73, passed away on March 24, 2011. He was born June 13, 1937 along with his twin sister Sharon to George Irwin and Vivian Dora (Weddle) Long in Lebanon, Oregon. Gene spent the first few years of his life with his family in The Dalles before moving to Salem, Oregon. He was in the first graduating class from South Salem High School in 1955. Gene attended Merritt Davis School of Business. He served 6 years in the Air National Guard. Gene met his wife Margaret Yvonne Goodwin in October of 1956 and were married on July 19, 1958. They lived in Sweet Home for the first years and then they moved to Roseburg where they made their home for 51 years. He retired from Roseburg Lumber Company after working there for 37 years at Plant #3 on the pond saw and as a log scaler. Gene was a volunteer fireman for Douglas County Fire District #2 for 27 years. He served as President for one year and was named Fireman of the Year in 1967. Sylvan and Yvonne were blessed with a son, Bradley Gene, and a daughter Susan Michelle. He loved to go hunting, fishing, and camping. He loved all the guys in the fire department and remained friends with many of them. He was a member of Westside Christian Church and loved his "church family". He is survived by his wife Yvonne, of 52 years, daughter Susan M. Irby, son-in-law Craig Irby, two granddaughters Cassandra and Fresca and three grandsons Craig, Derek and Grant of West Linn. He is also survived by grandsons Scott Long Weaver and wife Lovena of Junction City, Morgan Long Miele and granddaughters Bailey and Sydney Long Miele of Winchester and two great grandchildren Ezekiel and Ali of Portland. Six nieces, four nephews, a sister-in-law Joanne Long of Salem, and a brother-in-law Alton Pedersen of Alexandria, Virginia. Gene is preceded in death by his parents and siblings and his son Bradley G. Long. In lieu of flowers, contributions can be made to Westside Christian Church in Roseburg in Sylvan's name. A visitation will be held at Wilsons Chapel of the Roses in Roseburg on Wednesday, March 30, 2011 from 5-7 pm and on Thursday March 31, 2011 from 9:30 to 11:30 am. A Funeral Service will be held at Westside Christian Church in Roseburg on Thursday, March 31, 2011 at 1:00 pm. A Graveside service will be held at Belcrest Cemetery in Salem on Saturday 4/2/2011 at 1 pm

Sylvan "Gene" Long, 73, passed away on March 24, 2011. He was born June 13, 1937 along with his twin sister Sharon to George Irwin and Vivian Dora (Weddle) Long in Lebanon, Oregon. Gene spent the first few years of his life with his family in... View Obituary & Service Information

The family of Sylvan Gene Long created this Life Tributes page to make it easy to share your memories.

Send flowers to the Long family.