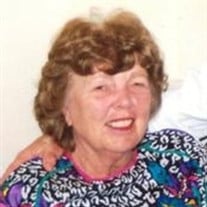 Shirley Ann Haines DeCamp, 86 passed away peacefully on Thursday, December 1, 2011, in her childhood family home in Umpqua. Shirley was born the youngest of three daughters to Lawrence D. and Hazel Henry Haines on March 30, 1925, in Drain, Oregon. As a young girl the family moved to live with her widowed maternal grandfather, Calvin Scott Henry I, at Calapooia. She attended the Calapooia School until its consolidation with Oakland in 1937. In 1938, the family moved to a small farm at Umpqua and she continued her schooling at Oakland graduating in 1943. She attended business school in Salem, Oregon, and returned to Roseburg, Oregon, working in the law office of Dexter Rice. She met and married Clarence "Van" DeCamp in 1949. They made their home in Roseburg where Van pursued his career in insurance and Shirley became a stay at home mom to her three boys. In 1983, Shirley and Van made their last move to her childhood family farm home. Shirley's pioneer heritage in Douglas County was very important to her. The Haines family arrived in Oregon at Scottsburg in the early 1880's, settling in the Umpqua/Calapooia area. She was a member of Douglas County and Oregon Historical Societies and a chapter member of the Umpqua Historic Preservation Society, Inc. She co-filed the injunction to prevent the demolition of the Historic Willis House, home of her Great Aunt Caroline Haines Willis. She was a member of the Umpqua Chapter DAR, Beta Sigma Phi, Riverbend Garden Club, Melrose Grange, and U of O Mothers Club, where she served twice as president. Shirley ran for City Counselor, tied for the position , and lost (fortunately) in the recount procedure. She loved the Douglas County Fair and for over two decades was very active with the Garden Plots at the fair. Shirley loved family holiday get togethers and spending time at the Oregon coast with family. Shirley leaves behind her husband of 62 years and three sons, Gary and partner, Dawn Miller of Eugene, Oregon; Bart and wife, Brooke of Redmond, and Brad and wife, Sonia Darlianova and their son, Alexander of Sherwood. Also surviving is her older sister, Dorothy and husband, Jim Schumacher of Tacoma, Washington. Her oldest sister, Doris Bacon preceded her in death in 2001. Also surviving is her brother-in-law, Gerald Bacon and niece, Judy Bacon, living just down the road towards Roseburg. She has one surviving sister-in-law, Virginia DeCamp Oberg and husband, Robert Oberg of Des Moines, Washington. She also leaves behind numerous other nephews, nieces and cousins. Many thanks go out to her cousin, Charlene Nichols, Tender Home Care, Amedisys Hospice of Roseburg, and her long term personal physician, Dr. William Townsend for all of their caring assistance, as well as to the many other visitors and those who have expressed their concern. In lieu of flowers, while nothing is expected, feel free to donate to either the Douglas County Historical Society or the Lane House in memory of fifth generation Oregonian, Shirley Ann Haines DeCamp. Visitation will be held on Wednesday, December 7, 2011, from 4 p.m., to 7 p.m. Funeral service will be held at 1:00 p.m. on Thursday, December 8, 2011, at Wilson's Chapel of the Roses, and a reception for family and friends will follow at 2:30 p.m. at the Roseburg Country Club.

The family of Shirley Ann DeCamp created this Life Tributes page to make it easy to share your memories.

Send flowers to the DeCamp family.