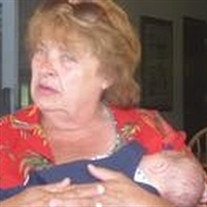 Sharon Elaine Gray, 62, of Roseburg, passed away Saturday March 19, 2011, unexpectedly at her home. She was born April 22, 1947 in North Battleford, Saskatchewan, Canada, to Harry and Evelyn (Berry) Seimens. Sharon attended school in Vancouver, British Columbia. She married William Henry Gray in 1966, in Canada, and they moved to Roseburg, Oregon, after the wedding. Sharon was a wonderful mother to her two boys Brent and Todd, and a grandmother that will never be replaced by her three grandchildren. They will miss her dearly. Sharon had the biggest heart in Dixonville and opened her home to a wide assortment of animals including ten raccoons, that will certainly miss her. Sharon is survived by her husband, William "Duffy" Gray, her son, Brent and his wife Carrie and their children Colton James, Brady, Bobby, and Brianne, her son, Todd and his wife Kim and their children Remington Hunter and Brookelyn Jean, and a large extended family of children she considered her own, including Shannon and Gina Strong and their children Meagan, Madison, Shania, Shayla, Sophia, and Sawyer. She is also survived by two sisters, Janet Sidow and Phyllis Easau of British Columbia, Canada, and several nieces and nephews. A memorial service will be Saturday, March 26, 2011 at 10 am at Wilson's Chapel of the Roses. Please visit the web site for Sharon at www.wilsonschapeloftherosesfh.com to leave a message for the family and to sign the on line guest book. A celebration of life will be held immediately following the memorial service at Seven Springs Ranch located at 10879 Buckhorn Rd, Glide, Oregon. In lieu of flowers donations can be made to Saving Grace

The family of Sharon Elaine Gray created this Life Tributes page to make it easy to share your memories.

Send flowers to the Gray family.