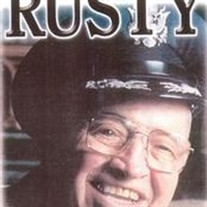 Russell E. "Rusty" DeGroat DeGroat, Russell Ellsworth of Roseburg, Oregon passed away on June 27th, 2011. He was born February 8, 1920 in Sussex, New Jersey, son of John Benjamin DeGroat and Myrtle Jagger DeGroat. He enlisted in the U.S. Army Nov. 6, 1940 and served as a motorcycle scout until transferring to the Army Air Corps in 1942. "Rusty" married Ruth McGhee of Maryville, Tennessee on February 13, 1943 in Waco, Texas. He served as a pilot for his remaining 27 years in the Air Force. During WWII he served in the China-Burma-India Theatre flying the "HUMP" receiving the Distinguished Flying Cross, three Air Medals and the Presidential Unit Citation. After the war he returned to the University of Montana's Forestry School and was recalled to active service in 1948. In addition to his flying duties he also served as an Air Traffic Officer on Guam, Forestry Officer and Squadron Commander at Eglin AFB, Florida, Ambassador's Officer in Athens, Greece, Air Force Conservation Officer, and Director of Natural Resources, Department of Defense, The Pentagon. He moved his family to Roseburg in July of 1968 and taught Forest Technology at Umpqua Community College until retiring in 1983. He was a member of the Society of American Forester's, An Association of Writers, 24+ years as a Wildlife Safari Docent, and a member of the Southern Oregon Warbirds. He is survived by his wonderful wife Ruth of 68 years, son Alan DeGroat and Donna Carroll of Roseburg, Oregon, granddaughter Julie DeGroat-Marlin, great-grandsons Tayler Charles Marlin and Tanner Russell Marlin of Roseburg, Oregon, and a brother Lawrence of Morrisville, Pennsylvania. "Rusty" loved life with a special emphasis on anything in the out-of-the-doors. He invites his Art and Woodcarving friends to join him when they are ready. The pencils and carving tools will be sharpened. A memorial service with Military Honors will be held at the Roseburg Memorial Gardens pavilion Wednesday, July 13th, 2011 at 11:00 a.m. In lieu of flowers donations may be made to the Wildlife Safari. Someday we will know, where the pilots go When their work on earth is through. Where the air is clean, and the engines gleam, And the skies are always blue. They have flown alone, with the engine's moan, As they sweat the great beyond, And they take delight, at the awesome sight Of the world spread far and yon. Yet not alone, for above the moan, when the earth is out of sight. As they make their stand, He takes their hand, And guides them through the night. How near to God are these men of sod, Who step near death's last door? Oh, these men are real, not made of steel, But he knows who goes before, And how they live, and love and are beloved, But their love is most for air. And with death about, they will still fly out, And leave there troubles there. He knows these things, of men with wings, And he knows they are surely true. And he will give a hand, to such a man -Cause He's a Pilot Too. -Leo Hymas

The family of Russell E. DeGroat created this Life Tributes page to make it easy to share your memories.

Send flowers to the DeGroat family.