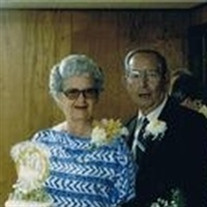 PAULINE I. BAGWELL 93 of Roseburg passed away Thursday September 30, 2010. She was born July 3, 1917 in Enid, Oklahoma to Henry and Viola Sturgeon. Pauline married Herman Bagwell on May 3, 1935. They made their home in La Junta, Colorado until his employment moved them to Roseburg in 1947. Pauline worked as cook for Roseburg School District and later as a baker for Mercy Medical Center until her retirement. Herman and Pauline were members of the Garden Valley Church of Christ. They enjoyed serving the congregation together for many years and considered this a very important part of their lives. After retirement Herman and Pauline spent several years wintering in Arizona as long as health permitted. She enjoyed fishing, bowling, quilt making, gardening, and knitting. She was well known for her baking and in particular her dinner rolls were often requested by family and friends. Pauline was preceded in death by her beloved husband, Herman. She is survived Ed and Rosalie Bagwell of Roseburg. She was blessed with three special grandchildren and their families. Grandson Eric Bagwell and his wife Pamela and their two daughters Brittani Childers and her husband, Ryan and Charissa Pohle. Eric is stationed in Tacoma, Washington with U.S. Air Force. Granddaughter Katherine and her husband Paul Van Es of Indianapolis, Indiana and their two children, Rebekah and Caleb. Granddaughter Amy and her husband Tommie White of Roseburg and their four children Trevyr, Ashlee, Konnir and soon to be appearing Breanne. Herman and Pauline had extended family with Tyonia and her husband Carl Wells and their two children, Sierra and Zane. Other survivors include one brother Robert Surgeon of Wichita, Kansas and Elsa Pearson of El Paseo, Texas. In addition to Herman, Pauline was preceded in death by three brothers Archiabald (Shorty), Kelly and Dean and one sister Oletha Howard. Funeral services will be held Thursday, October 7, 2010 at 2:00 at Wilson Chapel of the Roses. Pastor Ron Laeger and Minister David Price officiate. In lieu of flowers the family requests that contributions be made in Pauline's memory to Umpqua Valley Christian School tuition assistance program. Please visit Pauline's web site to leave a message for the family at www.wilsonschapeloftherosesfh.com. Wilson's Chapel of the Roses is in charge of arrangements.

PAULINE I. BAGWELL 93 of Roseburg passed away Thursday September 30, 2010. She was born July 3, 1917 in Enid, Oklahoma to Henry and Viola Sturgeon. Pauline married Herman Bagwell on May 3, 1935. They made their home in La Junta, Colorado until... View Obituary & Service Information

The family of Pauline I. Bagwell created this Life Tributes page to make it easy to share your memories.

PAULINE I. BAGWELL 93 of Roseburg passed away Thursday September...

Send flowers to the Bagwell family.