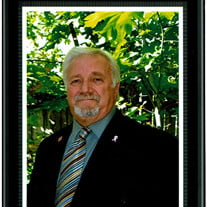 Paul Allen Hubbard passed away July 25, 2021, and as his mother put it, "He was born on a blustery March 30th day in 1943", Salem, Oregon to Lois and Lloyd Hubbard (deceased). After his parents divorced, he spent his youth with his grandparents Clyde and Ruby Farley (deceased). His mother remarried to Frank Wedel (deceased) and added to the family was his half-brother Randy Wedel and sister Janice (Bearden). Paul held various jobs throughout his life starting with the job at Lou and Eves Caf� in Eugene, Oregon and then went to work for Western Union delivering telegrams on bicycle through all kinds of weather. He continued his job until his graduation from Willamette High School in 1961 and soon thereafter married Judy Van Devender who was the mother of his two sons. He joined the United States Marine Corp Reserve and was honorably discharged in July 1968 having served a total of seven years. Other means of employment Paul held were in the grocery business and plywood industry. He retired from Williams/Franz Bakery after 27 years of service as a route salesman. On May 22, 1982, he married Roxanne Pulver. They both enjoyed golfing until Paul's health issues and their membership with the Street Memory Car Club and going to car shows where he displayed his 1955 Buick Century. He was always ready to go camping at the mere mention of it and enjoyed cooking and collecting recipes. One of his greatest loves was to share his baked goods at the many family gatherings. Paul was an avid joke teller for the sheer joy of watching people laugh. Paul joined the Roseburg Mercy Volunteer Program which led to his membership with the Oregon State Hospital Auxiliary where he rose through the ranks to become the first male to hold the position of President. He also volunteered with the Smart Reading Program and worked with the K-3 children. His biggest pleasure was to see them succeed. He was loved by his sons; Doug and Jeff (Jesse) Hubbard and his stepsons; Vince (Stacy), Eric (Cheryl), Darrin (Kari) Pulver. He was a beloved grandfather to Brandon, Kyle, Chelsie, Falon, Brooke, Darek, Seth, and Kenna as well as five great grandchildren and numerous nephews and nieces. Paul passed away peacefully at home while surrounded by his family. Private interment will be held at the Roseburg Memorial Gardens July 30, at 11 a.m. Special thanks to Community Cancer Center of Roseburg, Amedisys Hospice and Dr. Kumar.

Paul Allen Hubbard passed away July 25, 2021, and as his mother put it, "He was born on a blustery March 30th day in 1943", Salem, Oregon to Lois and Lloyd Hubbard (deceased). After his parents divorced, he spent his youth with his grandparents... View Obituary & Service Information

The family of Paul Allen Hubbard created this Life Tributes page to make it easy to share your memories.

Send flowers to the Hubbard family.