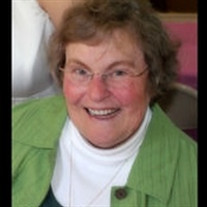 Mary Anne Hawley-Norris, 73, of Roseburg, Oregon passed away on August 1, 2011. She was born on November 27, 1937 in Vallejo, California to Norval and Elizabeth Gundershaug, and was raised in Lodi, CA. She was the eldest of six children and she dearly loved all of her siblings. She married A.L (Link) Hawley in June 1959 and resided in Harney County and Burns, Oregon for over 26 years. She earned her Bachelor's degree in Nursing from Stanford University in 1965 and worked for many years in nursing and home health. After the passing of her first husband, Mary Anne went back to school to earn her Master's degree in Nursing and become an Adult Nurse Practitioner at Oregon Health Sciences University (OHSU) in 1988. She married Gale Norris of Sutherlin, Oregon in January 1989 and resided in the Sutherlin and Roseburg area ever since. After the passing of her husband in May 1999, she retired from Douglas Community Hospital, and volunteered for many organizations over the years, including Mercy Hospital Volunteer Services, Wildlife Safari in Winston, Roseburg Lions Club, TOPS Club, the P.E.O. Sisterhood, the Calapooia Reflections Museum in Sutherlin, and the American Cancer Society's Relay For Life. She is survived by her children, Elizabeth and husband Kevin Charley of Lebanon, OR; Lincoln and wife Jeannie Hawley of Van Buren, AR; Lisa Hawley of Roseburg, OR; Scott and wife Vicki Norris of Canby, OR and Doug and wife Teresa Norris of Roseburg, OR. She is also survived by grandchildren Christopher Hawley of Prescott Valley, AZ; Jocelyn and Jared Charley of Lebanon, OR; Cole Norris and wife Kristen of Canby, OR, and Josiah, Mahala, Eli and Alema Norris of Roseburg, OR; and four great-grandchildren Brayden Wright, Selene Hawley, and Nikoli and Brie Norris. In lieu of flowers, the family encourages you to donate to the charity of your choice.

Mary Anne Hawley-Norris, 73, of Roseburg, Oregon passed away on August 1, 2011. She was born on November 27, 1937 in Vallejo, California to Norval and Elizabeth Gundershaug, and was raised in Lodi, CA. She was the eldest of six children and... View Obituary & Service Information

The family of Mary Anne Hawley-Norris created this Life Tributes page to make it easy to share your memories.

Send flowers to the Hawley-Norris family.