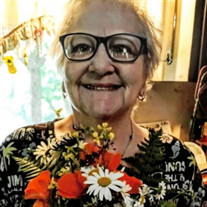 Mary Francis Hart, 73, of Elkton, died the morning of Oct. 18 in her Tyee home. Mrs. Hart, known by her closest family & friends as "Sam", was born Dec. 26, 1948, in San Angelo, Texas, to her proud parents Elmer Francis & Mary OZelle of Louisiana. Mary attended a few years at Byrd High School in Louisiana before graduating from San Antonio, Texas. She continued her education at McClain Community College in Tulsa, Oklahoma, when her studies landed her a rewarding career at Mt. Sinai Hospital, as well as a successful clerical career with 7-UP Bottling Company. She enjoyed playing bingo, dice and cards with her family. Throughout her lifetime, she has experienced many amazing events, such as seeing Lion King on Broadway, attending most of her grandkids sporting events, as well as help plan a Relay-4-Life Cancer charity venue with her oldest daughter, Katrina, who is also a cancer survivor. Her favorite was craft time with the grandkids, such as painting rocks. Nothing meant more to her than to assist with children’s baptisms through our church of 13 years. She is survived by her loving husband Wayne, of 34 years in Tyee; her oldest daughter, Katrina and granddaughter Kieryn, both of Elkton; her grandson Greggory of Eugene; Mary's youngest daughter Dyan; and two granddaughters, Autumn and Jaelyn, both of Lufkin, Texas; and two grandsons, Michael and Russell, both of Lancaster. Mary is also survived by all of her nieces and nephews in the California area, as well as the large, loving family of cousins scattered all over the Midwest. She was preceded in death by only her aunt, Elizabeth of Louisiana, and her youngest sister, Rosie, of California. She will be missed by so many. Arrangements are in the care of Wilson's Chapel of the Roses, along with her daughter Katrina La'Shell: 541-529-9328

The family of Mary Francis Hart created this Life Tributes page to make it easy to share your memories.

Send flowers to the Hart family.