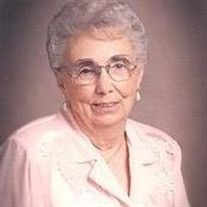 MARIE E. BROOKS went to be with her Lord on Saturday, June 11, 2011 with her loved ones by her side. Marie was born April 9, 1913 in Stanton, Nebraska to Sylvester and Sadie Canfield. Mom celebrated her 98th birthday this year. She was the 4th child of six. Following the death of her husband John Brooks, Marie moved to Roseburg, Oregon in 1991 to be near her daughter. Mom was married to James B Sturgill, know as JB for many years. There were in business for many years. Mom and JB became very good friends with John and Lillian Brooks. They traveled with their RV's to Mexico together. They attended the same church while living in Madras, Oregon. JB died in 1970. A few short years later Lillian passed away. Not long after, Mom and John married. They had over 15 wonderful years living in Thousand Palms, California and traveling all over the United States. Survivors include her daughter Dolores and her husband Larry of Sutherlin, Oregon; sister Helen Strain of Portland, Oregon; grandchildren Susan and Rick Johnson of Charlotte, North Carolina and Danny Sorenson and his wife Wendi of Grants Pass, Oregon; great grandchildren Ben and his wife Jaime Sorenson, Pat Sorenson, Tim Sorenson, Christi Helms and Jarrett and Billie Johnson; step great grandsons Ben and Chris Cheerier; great great grandchildren Tyler, Erik and Lexi Sorenson, Elsa Helms and a sister to be. Marie was also preceded in death by her son James Melvin Sturgill. Marie joined the Free Methodist Church in 1963 and served the Lord the rest of her life. Mom's great joy was that all of her grandchildren and especially her great grandchildren are Christians. The family is expressing a large Thank You to Darcy Potter and Lisa Nye for their love and care of mom. The last two weeks Lisa was constantly with mom. She was very loving and caring of mom. Funeral services will be held Friday, June 17, 2011 at 1:00 pm at the Calapooia Free Methodist Church. Graveside services will be held Tuesday, June 21, 2011 at 2:00 pm in the Mt. Jefferson Memorial Park cemetery in Madras, Oregon. Pastor Stewart Fowler will officiate. In lieu of flowers contributions may be made in Marie's memory to the Calapooia Free Methodist Church Building Fund, 333 Church Road, Sutherlin, Oregon 97479.

MARIE E. BROOKS went to be with her Lord on Saturday, June 11, 2011 with her loved ones by her side. Marie was born April 9, 1913 in Stanton, Nebraska to Sylvester and Sadie Canfield. Mom celebrated her 98th birthday this year. She was the 4th... View Obituary & Service Information

The family of Marie E. Sturgill Brooks created this Life Tributes page to make it easy to share your memories.