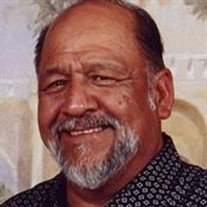 Teddy Bear, Devoted, Beloved, Reliable, Honest, Trustworthy, Godly, Peace Maker, Gentle, Compassionate, Strong. On March 31, 1945, in Riverside, California, a baby boy was born to Maggie and Manuel and they named him Manuel Robert Salazar II. On Friday July 29, 2011, at the age of 66, Manuel went to be with the Lord. Manuel grew up in Los Angeles and graduated from Freemont High School in 1963. After graduating, Manuel lived in South Gate, where he worked as a bobcat driver. With a CB handle of "Bacardi Man" Manuel drove a powder blue van and was president of a Van Club. A new life began in 1981, when Manuel gave his heart to the Lord, leaving his Van Club days behind him. Also in 1981 he was the Los Angeles county Single Men's bowling champion. Manuel met Linda Tunnell at Praise Chapel in Maywood, California and on February 12, 1983 they were married. While living in Bell, CA Manuel worked various jobs, but notably received many honors while working as a security guard. For his church; he served as an usher, sang in the choir, and was a bible study leader from 1983-1989. With a calling from the Lord, he and Linda moved to Rosemead, California and pastored Praise Chapel Rosemead from 1989-1991. They then moved to Sutherlin, Oregon to be with family and pastored Praise Chapel Sutherlin from 1992-1994. With a perfect attendance and having completed 13 years of work for VT West, Manuel retired in July 2010. Manuel coached little league and played as pitcher and catcher on the church and VT West softball teams. He also loved deep sea fishing; traveling, the Oregon coast, and cheering for his Oregon Ducks. Known by many different names; Junie, Junior, Dad, Papa, Grandpa, Teddy Bear, Manny, Papa Rooter, and Tio, Manuel had a profound impact on all and was a friend to all who knew him. He is survived by his wife of 28 years, Linda Salazar; four children, Manuel A. Salazar of La Puente, CA, Lisa Clark of Sutherlin, OR, Dylan James and Shannon Clark of Sutherlin, OR, and Justin and Sheila Clark of Roseburg, OR; 21 grandchildren, Donald, Manuel R., John, Jeremy, Michael, Destiny, Valerie, Jessica, Christopher, Trevor, Heidi, Kristen, Tim, Brianna, James, Wesley, Ashley, Jason, Jonelle, Texi June and Blake; 7 great grandchildren, Hayden, Devon, Hannah, Paris, Kira, Landen, and Chevy-Lynn; "Adopted kids", Crista, Maura, JJ, Tonya, Bo, Bj, Little Rito, Tina, David, Daniel, Anna and Fred. He was preceded in death by his parents, Maggie and Manuel A. Salazar; Siblings, David Salazar, Richard Salazar, and Danny Salazar, Mona Salazar Villarreal. Also his beloved dogs, Bonnie Blue, his baby, a Toy Poodle, and Sarge, his faithful German Sheppard. A Celebration of Life will be held at Roseburg Church of God, 4051 NE Stephens, Roseburg at 1:00 pm on Saturday August 13, 2011, officiated by Pastor Doyle Pooler. Donations can be made at any Umpqua Bank or mailed to Umpqua Bank, 100 W. Central, Sutherlin, OR 97479 care of Manuel Salazar. "Thank you Manny for serving the Lord, I am a life that was changed"

The family of Manuel R. Salazar created this Life Tributes page to make it easy to share your memories.

Send flowers to the Salazar family.