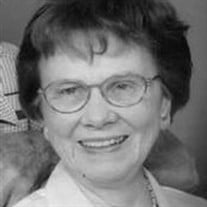 Age 92, passed away on Saturday, November 26, 2011, Roseburg, Oregon. She was born May 29, 1919, Kalispell, Montana, to parents, Joseph Earl Miller and Gladys Buchanan. She was married on June 18, 1939, Yakima, Washington. Madeleine and Ron Cavin and their two children moved to Roseburg in 1950. They bought property on the NW side of Roseburg where Ron built their home. The street that was constructed there was named after her, NW Madeleine Ave. Madeleine lived on Madeleine Ave until 2005. Madeleine worked as a secretary at Western Auto and Hucrest Elementary School. In 1959 she went to work at the Douglas County Sheriffs as a deputy sheriff and a certified police officer. She accompanied the sheriff on calls that involved women and/or children. Madeleine worked for the sheriff for 22 years until she retired in 1981. Madeleine crocheted and knitted many creations much loved by her extended family. She also had a green thumb and sold her "baby" plants at bazaars and other neighborhood sales as well as other handmade creations. At around the age of 60 she learned how to play tennis and to swim at the YMCA, in order to stay in good physical condition when she retired. She battled diabetes for around 40 years. When she lost her sight to this disease, she amazed her family by being able to remember who all was in the room visiting her, even though she could not see them. She remained in fairly good health until just the last two to three years of her life. She passed at the age of 92. She is preceded in death by her husband, Ron Cavin and two sisters, Wanda Kerslake and Loretta Tolley. She is survived by two children, Charleine Kaye Friday and Michael Cavin, six grandchildren, ten great-grandchildren and ten great-great-grandchildren. She was a member of the Buckaroo Square Dance Club, Lady Lions, and Presbyterian Church for (60 years, about). Graveside services will be held at Roseburg Memorial Gardens, on Thursday, December 1st, at 1 p.m. Memorial contributions may be made to American Diabetes Association.

Age 92, passed away on Saturday, November 26, 2011, Roseburg, Oregon. She was born May 29, 1919, Kalispell, Montana, to parents, Joseph Earl Miller and Gladys Buchanan. She was married on June 18, 1939, Yakima, Washington. Madeleine and Ron... View Obituary & Service Information

The family of Madeleine Cavin created this Life Tributes page to make it easy to share your memories.

Send flowers to the Cavin family.