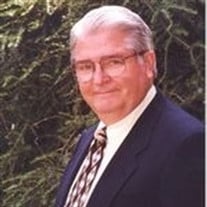 Marion Duane Fletcher, 82, of Roseburg, Oregon, passed away Monday, October 11, 2010. He was born in Indianola, NE on April 13, 1928, to Marion and Ethel Fletcher. His early years were spent on the family farm in McCook, NE where he rode his horse to a one-room school house. Duane graduated from Enterprise Academy, Abilene, KS at age 16, studied pre-med at Union College, Lincoln, NE, and graduated from Kansas City College of Osteopathic Medicine, Kansas City, MO in 1950 at age 22. One year later he married Edith W. Williamson, a registered nurse. Their first son, Donald, was born in 1953 and 9 months later the young family moved by train to Oregon. M.D. Fletcher, D.O., Family Physician and Surgeon, opened his first office on NE Stephens in Roseburg. In 1966, he relocated his office to Garden Valley Blvd. He enjoyed family practice medicine and serving his community. His own family grew to include Larry, Jeri Lynn and Kevin. Following a heart attack in 1985, he retired from the practice of medicine and took up many hobbies. Besides being an avid gardener, he was an artist, a designer, and a builder at heart. He loved a challenging project, whether house or yard design, a wood-working creation, or a stained-glass work of art. Whatever he did, he did to perfection. He was also active in the Roseburg Seventh-day Adventist church, serving on various boards and committees since becoming a member in 1955. He is survived by his wife, Edith, Roseburg; sons, Donald (Karen), Auburn, WA; Larry (Diana), Winston, OR; Kevin (Amy), Auburn, WA.; daughter, Jeri Lynn (Cam) Litvin Hillsboro, OR.; brother, C. Weldon Fletcher, D.O., (Beverly), Winchester, OR.; sister, MaryKay Fletcher, Loma Linda, CA.; 8 grandchildren, Kristin, Derek, Bryan, Chris, Stephanie, Emily, Elliot and Eric; and one great-granddaughter, Eryn Noel. A memorial service will be held Saturday, October 23, 2010, at 2:00 p.m. at Roseburg Seventh-day Adventist Church, 1109 NW Garden Valley Blvd., Roseburg. Visitation at Wilsons Chapel of Roses on Friday, October 22, 2010, between the hours of 9:00 a.m. and 2:00 p.m. Remembrances may be sent to Adventist World Radio, 12501 Old Columbia Pike, Silver Spring, Maryland 20904-6600, or the Roseburg Seventh-day Adventist Church.

Marion Duane Fletcher, 82, of Roseburg, Oregon, passed away Monday, October 11, 2010. He was born in Indianola, NE on April 13, 1928, to Marion and Ethel Fletcher. His early years were spent on the family farm in McCook, NE where he rode his... View Obituary & Service Information

The family of M Duane Fletcher created this Life Tributes page to make it easy to share your memories.

Send flowers to the Fletcher family.