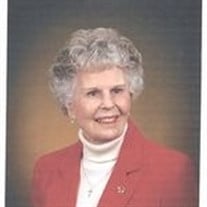 Louise Stringer, beloved mother, grandmother and great grandmother, passed away on October 29, 2010, at the age of 89. She was born on July 13, 1921 to parents Herman and Mary Kennedy in Los Angeles, Calif. Louise married the love of her life, Robert Stringer, on October 20, 1940. She was preceded in death by her husband, Robert, (Bob)in 1989, and her two brothers, Walter and Harold in 2007. She is survived by her 6 children: son - Robert Stringer of North Everett, Washington, and 5 daughters (and spouses): Eileen (Burt) McKenzie of Sutherlin, OR, Linda(Michael) Carol of Simi Valley, CA, Colette (Bengt) Vian of Glide, OR, Darlene (Michael) Dady of Glendale, OR and Mary (David) Van Dermark of Winston, OR. She is also survived by sisters: Bernice (Dave) Carson of Libby, Montana, Barbara Turner and Colleen Powell of Burbank, CA, her brother Larry Kennedy of Montana, and sisters - in - law; Arcelia Kennedy of Costa Mesa, CA, and Arlene Kennedy of Roseburg, OR. She is also survived by her 19 grandchildren and 40 great-grand children. Louise was referred to as "Grams" by all of her grandchildren and by their friends as that is how she was introduced. She loved being referred to as "Grams" by her family and friends. Louise and Bob moved from Los Angeles to Glide, OR in 1970. Bob was a retired L.A. fireman and immediately noted there was a need for fire protection in the Glide area. Bob, along with 2 other retired L.A. firemen (Harold Yound and Robert Riley) were the primary force in founding the Glide Rural Fire Department. The spouses (Louise,Betty and Rose) of these 3 firemen were the initial backup squad for these men. They would man the CB radios and telephones and notify volunteers of an emergency, make coffee and sandwiches for the firefighters when a nightlong fire was occurring and perform other support duties as needed. Louise was a member of the Glide Garden Club, Glide Community Club and worked for several years at the Glide Middle School as a cook. Louise was a devout Roman Catholic her entire life and worshiped at All Souls Catholic Church in Myrtle Creek,Oregon, during the last 10 years. Recitation of the rosary will be Friday, Nov. 5, at 7:00 p.m. at Wilson's Chapel of the Roses, 965 West Harvard Blvd., Roseburg, OR 97470. A Funeral Mass will be held Saturday morning, Nov. 6, at 10:00 at All Souls Church in Myrtle Creek with grave side services immediately following at Oak Creek Cemetery in Glide. There will also be a reception at Elmer's in Roseburg at approx. 1:00. In lieu of flowers, please consider a donation to All Souls Church in her memory.

Louise Stringer, beloved mother, grandmother and great grandmother, passed away on October 29, 2010, at the age of 89. She was born on July 13, 1921 to parents Herman and Mary Kennedy in Los Angeles, Calif. Louise married the love of her life,... View Obituary & Service Information

The family of Louise Mary Stringer created this Life Tributes page to make it easy to share your memories.

Send flowers to the Stringer family.