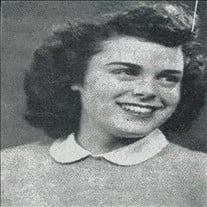 We are celebrating the 91 years that were granted to Lorraine lander by her loving Lord. She was born Lorraine Losee in San Diego, Ca. to Forrest C. and Mildred Aline(Swope) Losee. Even though she lived in California for her first two years, she refused to be considered a Californian. Lorraine and her older brother "Bud" started school in Denver, then moved to Klamath Falls. By this time Forrest remarried and the family included Lorraine's step mother Theda M.(Beard) Losee. After Lorraine finished 8th grade, the family moved to Roseburg, where she graduated from RHS in 1948. Following high school, she worked one year before attending Oregon State College and joining the Tri Delt sorority. during her year at Oregon State, she was a majorette with the band and participated in the Rose Festival parade in Pasadena, Ca. That was a great experience! The only thing that topped that was being pinned and then engaged to Dale Lander. Lorraine and Dale married in 1950, then welcomed three children in the next six years. Together they worked at raising those children and running their bookkeeping business that they started after Dale contracted polio. She unselfishly served Dale's needs for 48 years while he was confined to a wheelchair. Even with their busy lives, they continued to attend RHS home football games. They held season tickets for 65 years from 1954 to 2019! Even after Dale's passing in 2003, Lorraine continued to attend the games because she loved high school football. Some of Lorraine's other loves included the Oregon coast(especially Bandon), hot fudge sundaes, Community Concerts at UCC, driving, high school classmates and reunions, dogs(especially St. Bernards), flowers in the yard and on the patio, friends she gained through the years, all things Christmas, and AMERICA. Her greatest love though was her family. Lorraine's face lit up when seeing or talking about these precious people. They include sons Gregg(Joy)and Scott(Devennie);daughter Cindy(Terry);and grandchildren Jenna, Kelsey, Jacob(Deborah), Kristel(Lance), Toby(Karissa),Daniel(Bethany), and Tyson(Jess). In addition, she had 19 great-grandchildren, one niece and six nephews, and extended family Michael Troutt, Jason Oster, Krissy Farrell, and Jeremy Troutt. Smiles and hugs were always lovingly given and received by Lorraine. she may have been short in stature, but she was never short in kindness, honesty, or love. Her personal strength and perseverance were lessons to us all. Thank you so much Mom. Lorraine's memorial service will be July 15th at 1 pm at Wilson's Chapel of the Roses. A get together will be held at her home at 3 pm to share memories and laughter. She requested that remembrances be given to the Shriner's Hospital for Children, in lieu of flowers. May 21, 1930 - July 1, 2021

We are celebrating the 91 years that were granted to Lorraine lander by her loving Lord. She was born Lorraine Losee in San Diego, Ca. to Forrest C. and Mildred Aline(Swope) Losee. Even though she lived in California for her first two years,... View Obituary & Service Information

The family of Lorraine Lander created this Life Tributes page to make it easy to share your memories.

We are celebrating the 91 years that were granted to Lorraine...

Send flowers to the Lander family.