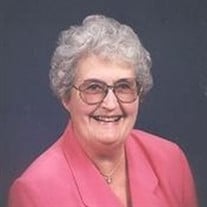 Lois Ann Shoemaker 86 years young passed away unexpectedly in her home in Roseburg, Oregon, on Wednesday, August 10, 2011. She was dressed in her Nikes and workout clothes ready to take on a new day and her 9 a.m. fitness class. Heavenly Father had other plans for her day. Instead she was taken to her home on high. She was born on October 4, 1924, in Portland, Oregon, to Charles Percy "Dick" Richards and Leta Leora "Lo" Porter. She was born into a family with an older brother, Robert Dale Richards. Her younger sister, Mary Lou was born in 1927. Lois' s greatest treasures were her friends and family. She was friendly and welcoming to all whose path she crossed. She grew up in Portland where she met Betty Carlson in grade school. They attended Grant High School together with Lois graduating in 1942. She was an excellent student and especially enjoyed typing and shorthand. She and Betty attended OSU together and were sorority sisters at Sigma Kappa. She and Betty and their spouses spent many vacations together in Kauai. This friendship continued for over 70 years until Betty's death. She met Bertram Raymond Shoemaker the weekend she graduated from OSU. They were both smitten and after a one year courtship via the US mail (he was attending photography school in LA) they were married on February 28,1948, at Central Presbyterian Church in Portland, Oregon, Lois wasn't sure about moving to the little, country town of Roseburg. After all, she was a "city" girl. She began collecting friends as easily as her husband collected and added to his stamp collection. She immediately became a member of the Presbyterian church in Roseburg and was an active member until her death. She especially enjoyed living one block from her church for the past 11 years. In 1950 their first son, John Bertram "Jack" Shoemaker was born. Lois's father-in-law, Dr. B. R. Shoemaker delivered Jack. He was the last of 4,500 babies delivered by Doc Shoemaker. Their second son, David Lee Shoemaker was born in 1952 weighing only 2# 6 ounces. He was the tiniest surviving baby ever born at Douglas Community Hospital. Lois had a wonderful life and was involved in many, local organizations including PEO, AAUW, Beta Sigma Phi. and Presbyterian Church groups. She never missed an opportunity to nurture friendships with a compliment, a phone call, a card, or a hug and smile. In her later years she has also enjoyed her book group, birthday lunch group. Bagel Tree friends, and her fitness center friends and teachers, For many years her nickname was "Scoop" because she always knew what was happening and rarely forgot a name or a face. She and Bert enjoyed a long and enjoyable marriage of 57 years. She was a 50's mom, always wearing her apron her throughout the day. Until her death she had a designated day for shopping, laundry, and cleaning. She and Bert traveled to all 50 states and took 32 trips to Hawaii. She spent much of her time in Hawaii reading every book available on Hawaiian history. Lois is survived by her son, John Bertram "Jack" Shoemaker and his wife, Pamela Marie of Sutherlin, Oregon, and by her son, David Lee Shoemaker of Roseburg, Oregon; her sister, Mary Lou McEachern of Longview, Washington; her brother-in-law, Robert "Bob" Norton of Roseburg, OR; granddaughter, Melissa Marie Lavagnino and her husband, John "Jack" Lavagnino of E. Wenatchee, Washington; granddaughter, Maura Ann Schomus and her husband, Christopher Schomus of E. Wenatchee; grandson, John "Mark" Shoemaker and his wife, Megan of Wahiawa, Hawaii; Nicholas Adam Mattox of Albany, Oregon; and seven great-grandchildren, Andrew, Megan, and Jennifer Lavagnino; AJ and Anna Schomus; and Austin and Avery Shoemaker. Lois was preceded in death by her father, Charles Percy "Dick" Richards when she was only three years old; her mother Leta Leora "Lo" Porter; her brother, Robert Dale Richards and his wife, Barbara "Bobby" Richards; and her husband, Bertram Raymond Shoemaker; her two sisters-in-laws Betty Johnson and Doris Norton and brother-in-law, Don McEachern. Lois will be missed by all who knew her. We know she will be the first to greet us as we join her in our heavenly home. A memorial service will be held to honor her life on Saturday, August 20, 2011 at the First Presbyterian Church in Roseburg, Oregon, at 11 a.m. Please join us in dressing In bright Hawaiian colors to celebrate her zest and joy for life, friends and family. Lois was an avid reader and loved the Douglas County Library. You are invited to make a memorial donation to the library in her memory.

Lois Ann Shoemaker 86 years young passed away unexpectedly in her home in Roseburg, Oregon, on Wednesday, August 10, 2011. She was dressed in her Nikes and workout clothes ready to take on a new day and her 9 a.m. fitness class. Heavenly Father... View Obituary & Service Information

The family of Lois Ann Shoemaker created this Life Tributes page to make it easy to share your memories.

Send flowers to the Shoemaker family.