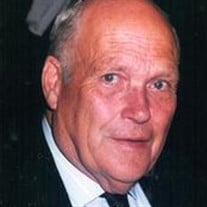 LLOYD OSCAR NELSON 93, entered the heavens to those waiting for him on December 1, 2011 at the Roseburg VA Transitional Care Unit where he had been staying since April 19th. Lloyd was born May 1, 1918 to Oscar and Agda Nelson, immigrants from Sweden. He was born in the farmhouse that still stands at the bottom of Elgarose Loop Road, just west of Roseburg, then known as "Swedeville". He went to school in Elgarose until the family moved to Roseburg in 1929 where he attended Rose School, then on to Roseburg High School to graduate in 1938. In 1934 as a young student in high school, Lloyd started working part time after school for the Umpqua Dairy. Ormand Feldkamp, the co-founder, became his mentor and someone Lloyd looked up to and highly respected. At the start of 1941, he asked Ormand if he could take a short-term job with Morrison-Knudsen, Boise, Idaho. It would be a chance to work long hours and make good money building an air base for the United States on Wake Island in the North Pacific, halfway between Honolulu and Tokyo. He was hoping he could have his job back when he returned. Ormand assured him so, however, he advised against him leaving. Lloyd was sent with a group of construction workers in May of 1941 to Wake Island. On December 8, 1941, Wake Island was attacked by the Japanese. While Wake Island was viewed as an easy target of conquest by the Japanese, 600 plus Marines and over 1100 construction workers became the "Defenders of Wake" and ruined enemy plans for a quick conquest by holding the Japanese invasion off for 15 days. On December 22 they surrendered to the Japanese. The prisoners were kept on the island with limited clothing in the daytime tropical heat and the cool evening temperatures under constant intimidation of the Japanese troops. On January 12, 1942, the largest group of prisoners boarded a Japanese ship and set sail to Yokohama, Japan. Lloyd was kept in various prison camps in China and Japan doing slave labor jobs for the Japanese war machine. Finally after 44 months in prison camps, Lloyd was liberated from the notorious Omori prison camp and rescued by American troops on August 14, 1945. At a weight of 110 lbs., Lloyd and fellow prisoners were taken to American hospital ships in Tokyo Bay and were able to witness the surrender sighing on August 15. An act of Congress in 1981 gave the Wake Island workers VA benefits and honorable discharges from the US Navy. Lloyd arrived home October 1945 and resumed his work at the Umpqua Dairy in January 1946 where he stayed until his retirement in 1973. While working for the dairy, Lloyd also owned and operated four Laundromats in Roseburg and Sutherlin from January 1970 until he sold them in April 1989. On April 12, 1947 Lloyd stood as best man for his longtime friend Jim Loomis. Jim's bride, Char Loomis, brought one of her best friends, Annabelle Downs, to be in the wedding which was held in Roseburg, Both Annabelle and Char had grown up together in Duluth, Minnesota. Lloyd and Annabelle struck up a friendship and then a romance and were married February 14, 1948, in Duluth, Minnesota. The two couples and their families were to become very close over the years as they settled in Roseburg. In 1952 Lloyd used his construction skills he acquired on Wake Island to build the family home at 641 W Stanton Street while also working at the dairy. Lloyd was active in the Faith Lutheran Church, past member of the Elks and Moose Lodges, served on the Board of Directors for the Umpqua Diary, past Boy Scout leader for Troop 4, active in his Survivors of Wake Island organization and a past volunteer fireman for the Roseburg Fire Department. He fought the 1959 Roseburg blast and was given the job of hosing the Suburban Propane tanks (in the current location) with his friend and dairy co-worker, Jack Walters, to keep them cool and from exploding. He would often say how that evening inferno reminded him so much of the Wake Island battle. Lloyd is survived by his three children, daughter Carolyn Reeves of Gresham, Oregon, son Tom (JoAnne) Nelson of Roseburg and daughter MaryAnn (Nels) Johnston of Winston, Oregon. He is also survived by his second wife Ruby who is being cared for by her daughter, Karen Jensen in Caldwell, Idaho. Also surviving Lloyd are his four granddaughters: Jessica Willie of Longview, Washington, Sydney Reeves of Portland, Oregon, Liz Nelson Vernon of Seattle, Washington, Katie Nelson Marcucci, Bury St. Edmonds, England; grandson Robert Nelson of Seattle, Washington. Six great grandchildren graced Lloyd's life: Kaleb Carr, Colton Willie and Kaleigh Willie all of Longview, Washington, Taylor and Kennedy Reeves of Portland, Oregon and 21/2 month old Greacen Vernon of Seattle, Washington whom Lloyd was able to cuddle before his passing. His sisters Marion Adams of Lebanon, Oregon and Mildred Prouty of Redmond, Washington along with his brother Donald of Tucson, Arizona also survive Lloyd along with numerous nieces and nephews. Foreign exchange student and friend Anneliese Walter and her daughter Theresa Walter of Austria. Preceding Lloyd in death are his wife and mother of his children, Annabelle, parents Agda and Oscar, sister Mary Hall and brothers Ed, Ivar and Lester (Bud). The family would like to thank all those who cared for Dad the last couple of years: Dr. John Powell, all the wonderful and loving staff and doctors at the VA Medical Center's Transitional Care Unit, and the wonderful staff at Manor House. A "Celebration of Life" memorial service will be held at 2:00 pm, Tuesday, December 27, 2011 at the Faith Lutheran Church, Pastor Jane Baker presiding. A private family gravesite dedication at Roseburg Memorial Gardens was held on Saturday, December 10th. In lieu of flowers, donations may be made in memory of our Dad to Roseburg's VFW or Faith Lutheran Church. Please feel free to leave a story or share your thoughts on this website. It will mean a lot to our family. Thank you to everyone for all your thoughts and prayers. Carolyn, Tom and MaryAnn

LLOYD OSCAR NELSON 93, entered the heavens to those waiting for him on December 1, 2011 at the Roseburg VA Transitional Care Unit where he had been staying since April 19th. Lloyd was born May 1, 1918 to Oscar and Agda Nelson, immigrants from... View Obituary & Service Information

The family of Lloyd Oscar Nelson created this Life Tributes page to make it easy to share your memories.

LLOYD OSCAR NELSON 93, entered the heavens to those waiting for...

Send flowers to the Nelson family.