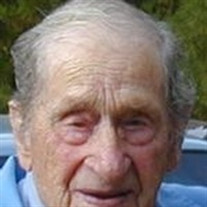 The family and friends of Lewis Walter (Lewie) Cottrell have been blessed by his presence on this earth for over 95 years, he passed away August 26th in his sleep in his own home. He was born October 8, 1913 in Long Beach, California to Edna Bosworth and James Cottrell. Lewis had two brothers, Lester and Gareth. After frequent moves following his mother's death in 1918, he moved in the 1930's to the Riversdale area west of Roseburg, Oregon to live with his aunt and uncle, Robert & Avis Harmon, and their son Donald. In 1937 he purchased eight acres of the Curry Estate and moved his grandmother's house that sat on Harmon's property down the road to its current location on Quail Lane. He married Drusilla Harvey of Baker City on December 31, 1941 before entering and serving in the Army Air Corps located in Mather Field, Sacremento as a Medical Surgical Assistant. After the war, he came back to Oregon and with Drusilla built and operated a chicken farm with a few goats and sheep. During this time he enjoyed building interesting "contraptions", in the early 1950's he built two 'micro-midget' race cars (slightly larger than a go-cart). These were raced at the Douglas County fairgrounds in what is now the pig barn. At that time, one of the cars was very unique in that he built it as front-wheel drive. In the late 50's he started doing Welding jobs out of his barn, local farmers would bring in their plows to be sharpened, and he began repairing farm equipment in the area. He designed and fabricated pieces of equipment that had practical applications; including a portable log-scaling station for BLM, an implement that fit on a tractor that harvested fruit trees, a snow-cat, and multiple boat and hauling trailers. In 1962, his operations expanded, moving into town to Fullerton Street where he owned and operated Roseburg Spring & Welding. After retirement he enjoyed gardening, gold panning, rock hounding and building things in his shop. After 29 years of marriage Drusilla preceded him in death in 1971. He then married Opal Lake and fully loved and enjoyed her daughters, Irene Bowman, Maxine Anderson and Louise Decker and sons, Lloyd and Dick Lamar. His life was made richer with their spouses, children and grandchildren. After 18 years of marriage Opal passed in 1989. Lewis leaves a wonderful legacy to his family and friends by being a role model who was a kind, generous, and loving man. He loved to give bouquets of flowers to anyone who visited and would offer to give rides around the yard in his 1906 Oldsmobile replica that he would enter in Graffiti Night. Truly a remarkable man, at the age of 90 he was still found working out of his barn, actively building a steam-powered car from scratch and then a tilt-bed trailer to haul it on. For over fifty years, he had the good fortune to have caring neighbors: Darwin and Maxine Lee; and for over seventy years cousin Don Harmon and wife Betty and their children, grandchildren and great-grandchildren. Lewis is survived by his only son, Gordon, wife Christine and their three sons: Casey, wife Valerie, grandson Taylor, granddaughter Sarah of Tualatin OR; Cary, wife Becky, granddaughters Alyssa, Kelsey and Emily of Olympia WA; and Kyle of Beaverton OR. He served as "Papa Lewie" to Christine's brothers Brad, Dana and Lewis Baughman and sister Jennie Seefeld and their spouses and families. Services will be held at 11:00 AM on Thursday,September 3rd at Wilson's Chappel of the Roses 965 West Harvard Ave. Roseburg.

The family and friends of Lewis Walter (Lewie) Cottrell have been blessed by his presence on this earth for over 95 years, he passed away August 26th in his sleep in his own home. He was born October 8, 1913 in Long Beach, California to Edna... View Obituary & Service Information

The family of Lewis Walter Cottrell created this Life Tributes page to make it easy to share your memories.

The family and friends of Lewis Walter (Lewie) Cottrell have...

Send flowers to the Cottrell family.