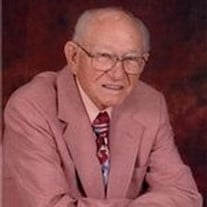 On June 19, 1922 in Shallowater, Texas a baby boy was born to Bettie and Russell and they named him Leonard Franklin Tunnell. On November 16, 2008, at the age of 86, Leonard went to be with the Lord. At a very early age he moved from Texas to Arizona and after serving in the CCC, he became a cowboy. He met Dorothy Demarest 2 days after her 16th birthday and they were married Christmas Day, 1941. They immediately moved to San Diego where he worked in the Aircraft Industry until He was inducted into the U.S. Navy where he served on the carrier, the U.S.S. Lexington In WWII. He returned to Arizona in 1946 where he became active in the Church of God as Clerk and the music department. In 1962 he moved back to California where he Worked for the Garden Grove School District. He continued serving God in the Church Of God as Clerk and in the building program and as a singer. He founded the Golden Tones Gospel Quartet in which he was the bass singer. He felt the Lord calling him to The Pacific Northwest and in 1978 he took a very early retirement and moved to Sutherlin, buying the old X-L Court and changing the name to LenDot Apartments. He became a local Handyman, driving an old cream-colored Milk Truck to do his work. He continued to serve the Lord at the Roseburg Church of God, helping to build a new Church, working in the music department and as Clerk. His greatest joy was serving God in any way he could. He loved to sing for the Lord and passed this joy on to Many . He taught his kids and grandkids to always put God first. He became Involved in the River of Life World Outreach Center and during this time made 5 Trips to Africa where he sang to thousands. He served the City of Sutherlin on the Planning Committee, the City Council, as President of the Chamber of Commerce, Sutherlin Lions Club, Full Gospel Businessmen, and was named Religious Leader of The year in 1980. He is survived by his "girl friend" of 67 years, Dorothy, and three Children: George of Phoenix, Arizona, Sharon Pink of Lakeside, Oregon and Linda and Manuel Salazar of Sutherlin as well as 10 grandchildren: Crista Johnson, J J Petchel, Roxanne Koenig, Misty Milster, Troy Lombard, Wendy Lombard, Rainy Gandhi, Lisa Clark, Dylan Clark and Justin Clark plus 23 great grandchildren and 3 great, great grandchildren and "adopted kids" Lola, Tim, Joe, Maura, Leasa and Fred. He also leaves his sisters Willadean Tapley, Ruth Moore and brother Ernest Tunnell. He was preceded in death by his parents Bettie and Russell Tunnell, sister Edna Atkeson and brother James Tunnell. A Celebration of Life/Homegoing will be held at the Roseburg Church of God, 4051 NE Stephens, at 11 AM on Saturday, November 29, 2008. Pastor Doyle Pooler officiating. In lieu of flowers, donations may be made to Amedisys Hospice of Roseburg, 2510 Edenbower, Ste. 112, Roseburg.

On June 19, 1922 in Shallowater, Texas a baby boy was born to Bettie and Russell and they named him Leonard Franklin Tunnell. On November 16, 2008, at the age of 86, Leonard went to be with the Lord. At a very early age he moved from Texas to... View Obituary & Service Information

The family of Leonard Franklin Tunnell created this Life Tributes page to make it easy to share your memories.

Send flowers to the Tunnell family.