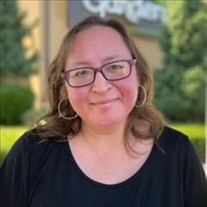 Juliann Goodwin Sharp of Sutherlin, Oregon passed away peacefully in her home on Monday, May 10th, 2021 at the age of 49. Juliann was born on July 28, 1971, in Santa Clara County, Los Angeles, California. She was adopted at birth and later sealed in the LDS Temple to John and Joyce Goodwin. She moved frequently throughout her childhood and graduated from Oakmont High School in Yuba City, California in 1989. After graduation, Juliann moved to Roseburg, Oregon, and received her CNA nursing degree from Umpqua Community College. On March 10, 1993, Juliann married the love of her life, Mike Sharp, in the LDS Temple in Salt Lake City, Utah. They were later sealed in the same temple for time and all eternity. Juliann was a loving, selfless mother who dedicated her life to her family and caring for others. She lovingly cared for her four children, making them the priority of her life. When her husband became ill of multiple sclerosis, she spent seven years of her life by his side, taking care of his every need and expressing her love for him. Additionally, she had a special love for the elderly and helping those who couldn't help themselves. She spent most of her time working as a caregiver and formed a personal connection with each client, going out of her way to make sure all of their needs were met. Juliann was proceeded in death by her parents, John and Joyce Goodwin, her husband, Mike Sharp, and stepsister, Evelyn Waite. She was survived by her four children, Breanna, Janessa, Mikey, and Hannah, her sister, Rachel, her in-laws, Dr. and Mrs. Larry Sharp, her brothers-in-law Jon and James Sharp, and sister-in-law Sarah Sperry, and spouses. She is also proceeded by her stepfather, Cleve Waite, and her step-siblings, Seth Waite, Kerri Hamrick, Lyle Waite, Tamra Thorup, Khrystal Kwiatkowski, Amber Anderson, Ira Waite, Dayton Waite, CJ Waite, and spouses. A service will be held Saturday, May 15 at one o'clock at 351 St John St in Sutherlin, Oregon.

Juliann Goodwin Sharp of Sutherlin, Oregon passed away peacefully in her home on Monday, May 10th, 2021 at the age of 49. Juliann was born on July 28, 1971, in Santa Clara County, Los Angeles, California. She was adopted at birth and later... View Obituary & Service Information

The family of Juliann G. Sharp created this Life Tributes page to make it easy to share your memories.

Send flowers to the Sharp family.