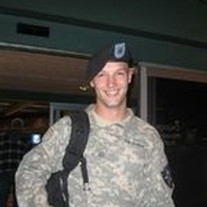 SGT JOSHUA ALLEN LENGSTORF On Sunday, January 3, 2010, Sergeant Joshua Allen Lengstorf was killed in action in Afghanistan for Operation Enduring Freedom. Josh was born in Cottage Grove, Oregon on December 4, 1985 to Eric Lengstorf and Ronda Crewse. During his childhood his family lived in the Philippines, New Mexico, Montana and moved back to Oregon in 1997. Josh attended school in Elkton and was a 2004 graduate of Elkton High School. He played football, basketball and track in school. He was also a very devoted fan of the Oregon Ducks and hoped to one day play college football. Josh was an avid outdoorsman and loved hunting, fishing and tramping around in the woods with his family. In September 2006, Josh joined the U.S. Army and in 2007 completed a tour in Iraq. Upon returning home he was stationed at Fort Carson, Colorado. In May 2009 his unit deployed to Afghanistan. In September of 2009 he was able to come home for R and R and be present for his daughter's first birthday and many family members were able to be there to see him. Joshua met his wife , Jesse Church in middle school where they became friends and in 2008 were married. Later that year their daughter, Kadence, was born at Fort Carson. Josh planned on going to college and to own a ranch. Josh is survived by his wife Jesse, their daughter Kadence; parents Ronda Crewse and Chuck Collins of Yoncalla, Oregon, Eric and Lisa Lengstorf of Olympia, Washington; brothers Brian and Corey Lengstorf both of Yoncalla, Oregon; grandparents Ronnie and Marge Crewse of Yoncalla, Oregon, Barb Lengstorf of Whitefish, Montana and Violet Collins also of Yoncalla, Oregon; great grandparents Carl and Lanita Ashley of Roseburg, Oregon and Grace Crewse of Walla Walla, Washington; numerous aunts, uncles and cousins. Joshua was preceded in death by his grandfather Walter Lengstorf, uncle Brett Lengstorf and his cousin Lacy Dawn Harris. Funeral services with military honors will be held Saturday, January 16, 2010 at 11:00 am at the Douglas County Fairgrounds. Private interment will be held in the Yoncalla Masonic Cemetery in Yoncalla, Oregon. Those who wish may pay their respects on Friday, January 15, 2010 from 12:00 pm until 6:00 pm at Wilson's Chapel of the Roses.

The family of Joshua Allen Lengstorf created this Life Tributes page to make it easy to share your memories.

Send flowers to the Lengstorf family.