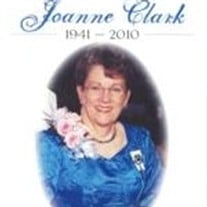 Joanne Roadman Clark Of Port Gamble, Washington, joined her Lord and Savior in heaven on Saturday, December 25, 2010, at the age of 68. Joanne was born in Roseburg, Oregon, on December 31, 1941, to Ted and Kathryn Roadman and spent her youth on the family farm in Umpqua, Oregon. She was an active participant in 4-H with her Jersey cows and also with her cooking and sewing. She graduated from Oakland High School in 1960, where she met and subsequently married the love of her life, Jerry Clark. Job opportunities led them away from Douglas County in 1976, yet they remained closely tied to many friends and relatives. Having recently celebrated 50 years of marriage on November 5, 2010, Joanne will always be remembered as a devoted wife and mother and was very active in her church and in many other charitable organizations. She truly shined in Eastern Star and was a life time member of Oakland Chapter O.E.S. and a life time member of Priscilla Chapter in Port Gamble, Washington. She was deeply honored to serve as the Worthy Grand Matron of the state of Washington in 2006-2007. Joanne and Jerry traveled a great deal with their dachshund Amy and many a night was spent ensuring a comfortable place was to be had for the four legged family member! Joanne was a devout Christian and used every opportunity to witness for the Lord. Joanne was preceded in death by her parents and her sister, Sharon Malley. She is survived by her beloved husband, Jerry of Port Gamble, Washington; her daughter, Julie Winans and husband, Darrell of Shelton Washington; her daughter, Janice Laviolette and husband, Kelly of Nehalem, Oregon; her brother, David Roadman and wife, Linda of Central Point, Oregon; her brother, Ken Roadman and wife, Vickie of Bend, Oregon; three grandchildren - Jason and Kayla Winans and their spouses and Dylan Laviolette. She had one great-grandson, Cameron Winans. As much as we miss her, we know she is at peace and home with our Heavenly Father. Her kind heart and generous spirit touched many lives and will never be forgotten. A memorial service will be held at Wilson's Chapel of the Roses at 1 p.m. on Tuesday, January 4, 2011. Interment at Roseburg Memorial Gardens will follow shortly after. The family suggests that in lieu of flowers, a donation in Joannes honor as a six year breast cancer survivor be made towards further research for the cure of any and all cancer.

Joanne Roadman Clark Of Port Gamble, Washington, joined her Lord and Savior in heaven on Saturday, December 25, 2010, at the age of 68. Joanne was born in Roseburg, Oregon, on December 31, 1941, to Ted and Kathryn Roadman and spent her youth... View Obituary & Service Information

The family of Joanne Roadman Clark created this Life Tributes page to make it easy to share your memories.

Send flowers to the Clark family.