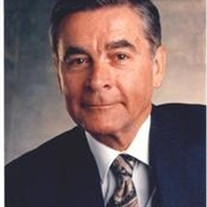 James Wesley Poirot, 79, of Roseburg, Oregon passed away on August 4, 2011 after suffering from congestive heart failure. Jim was born in Douglas, Wyoming on November 24, 1931 to Charles Eugene Poirot (1900-1967) and Mildred Lee Poirot (1905-2003). He and his sister, Edith, spent their early years in a small cabin built by their father on a homestead in the Wyoming forest. For the next few years, they lived in various construction camps in the Western US. In 1936, the family moved to Roseburg, then in 1941, to Kodiak, AK, where Charles was involved in building the Kodiak Naval Air Station. They lived briefly in Douglas, WY, Corvallis, OR, and Hillsboro, OR, before returning to Roseburg in 1944. Jim graduated from Roseburg High School in 1949, along with his friend since age 13 and girlfriend since age 15, Raeda, whom he married on June 14, 1952. Jim chose civil engineering as his career at age 4, when an uncle explained that a nearby dam was designed by civil engineers. He and Raeda attended Oregon State College (now OSU), and Jim eventually became Chairman of the Board of CH2M-Hill, an international engineering company whose roots are in Corvallis. He held key positions in many professional organizations, serving as President of the American Society of Civil Engineers, VP of the World Federation of Engineering Organizations, and as a member of the US delegation to the UN General Assembly on Sustainable Development, to name just a few. OSU awarded him an Honorary Doctorate of Engineering in 2003. Jim helped countless people in their careers and mentored many students, assisting them in applying for scholarships, navigating the academic system, and searching for jobs. Jim and Raeda lived in Corvallis, Fairbanks, Anchorage, Seattle, Atlanta, Denver, then Seattle again, and returned permanently to Roseburg in 2003. They had two sons, Steven James, and Ronald Alan, and three grandchildren by Steven: Christopher James (23), Shaun Steven (21), and Brooke Nicole (18). Their son, Ronald, died of cancer in 2003. Jim and Raeda were active pilots with instrument and multi-engine ratings and logged many thousands of hours during 40 years of flying in North and Central America. Both of their sons and one of their grandsons also became pilots. The entire family, including all three grandchildren, became active SCUBA divers and skiers. Jim is survived by his wife of 59 years, Raeda, his sister, Edith Sullivan and her husband Patrick, his son, Steven, his three grandchildren mentioned above, his nephew, Ryan Sullivan and his wife Patty, his niece, Debbie Horton and her husband Roger, and his niece, Diana Colby and her husband John. A memorial service will be held on Monday, August 15 at 11:00am at Garden Valley Christian Assembly (3047 Garden Valley Road) with a light lunch to follow. In lieu of flowers, donations may be sent, in Jim's memory, to Roseburg High School Class of '49 Scholarship Fund, care of Susan Gerretson, 530 W Elizabeth, Roseburg, OR, 97471.

The family of James W. Poirot created this Life Tributes page to make it easy to share your memories.

James Wesley Poirot, 79, of Roseburg, Oregon passed away on August...

Send flowers to the Poirot family.