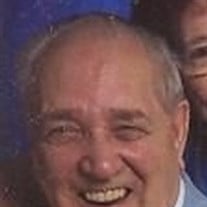 Jack E. Fluegeman age 80, of Roseburg, Oregon passed away Thursday, April 29, 2010 in Eugene, Oregon. He was born November 16, 1929 in Mt. Healthy, Ohio to Edward and Elsie Fleugeman. Mr. Fleugeman served in the US Army, stationed in Fairbanks, Alaska during the Korean Conflict. On November 13, 1954 in Las Vegas, Nevada Jack married Mary Ellen, who proceeded in death after 53 years on October 10, 2007. Mr. Fleugeman worked for many years as a long haul truck driver. The Fleugeman's lived for several years in Nebraska, Nevada, Washington and California prior to moving to Roseburg. On April 22, 2008 in Carlton, Nevada he married Catherine Cluver. Jack enjoyed woodworking, gardening, traveling, remodeling, animals, music, loved to make people laugh and was quite a story teller. Mr. Fleugeman was a member of the Teamsters and attended First United Methodist Church. Survivors include his wife Catherine Fleugeman of Roseburg, Oregon; daughters Kathie J. Kelley of Yorba Linda, California, Barbara McKinnies of Sparks, Nevada and Julie Herkins of Cypress, California; step-children Robert Knapp, Terry Thomas and Glenda Tucker all of Roseburg, Oregon, Nancy Pyle of Eugene, Oregon and Susan Hand in Korea; brother Norman Fleugeman of Palmdale, California; sisters Nancy Husband of Big Pine, California and Chareyl Villanueva of Los Angeles, California; 5 grandchildren; nieces and nephews. Jack was also proceeded in death by his parents and a sister, Lois Flemming . Funeral services will be held Friday, May 7, 2010 at 10:00 am at Wilson's Chapel of the Roses. Private interment will be held within the grounds of Roseburg Memorial Gardens. Those who wish may pay their respects on Thursday, May 6, 2010 from 12:00 PM until 5:00 PM at Wilson's Chapel of the Roses.

The family of Jack E. Fluegeman created this Life Tributes page to make it easy to share your memories.

Send flowers to the Fluegeman family.