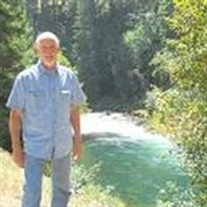 Russ Hubbard Our Beloved husband, father, brother, grandfather and great grandfather "Russ" suddenly was called to heaven July 6, 2011. Longtime resident of Roseburg, Herman Russell Hubbard, 64, was born in Dallas, Oregon, January 6, 1947 to E. Louise and Herman N. Hubbard. Russ's family moved to Myrtle Creek, Oregon in 1948 where he attended school and later graduated from Roseburg High School. Russ was an avid sports fan. He loved Baseball, he played for Doc Stewart's Legion Team at Roseburg High, also helped coach little league baseball and enjoyed attending his children and grand-children's baseball games. He was a longtime member of the YMCA. Russ served his country in the Army in Viet Nam and was honorably discharged. After returning from the Service he worked for the US Post Office in Portland, Oregon, Dr. Johnson Lumber and Hanna Nickel in Riddle, Oregon. In 1984 he went to work at the VA Medical Center in Roseburg and retired after 24 years of service. He is survived by his wife Mirtha, formerly of Peru. Son, Jason Hubbard and grandson Alex. Daughter, Sarah Hubbard and grandchildren Taylor, Hayden and Amya. Son Aaron Hubbard and grandsons, Aason and Atlas, all of Roseburg and Green. Daughter Rhonda Keesee, grandchildren William and Amber, and great granddaughter Emma Rose of Kansas. Siblings, Ben Hubbard of Nevada, Doug Hubbard of Lake Stevens, WA. Peggy Lyons of Kemp, TX, as well as their families. Many friends and relatives of Peru. Childhood friend Vernon Walker and family were especially dear to him. Russ was a member of the Roseburg Church of God at 4051 NE Stephens, along with his wife Mirtha. He served as Intercessor of Prayer and had passion and prayer for the nations and families. They supported the ministries around the world as sponsors. He loved our Lord with all his heart and will be dearly missed. Memorial services will be held at The Roseburg Church Of God on Friday July 15th at 1:00 p.m.. Graveside services with Military Honors will follow at Roseburg Memorial Gardens.

The family of Herman Russell Hubbard created this Life Tributes page to make it easy to share your memories.

Send flowers to the Hubbard family.