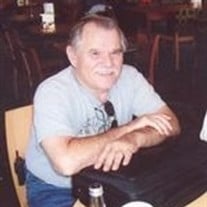 Eugene (Gene) Nicholas Morano left our world on September 22, 2010. He was born August 8, 1935 in Greenwich, Connecticut. He leaves behind his beloved wife, Kathy, whom he married on November 11, 1978 and children, Tony Morano of Twin Falls, Idaho, Adina Erridge of San Ramon, California, Kim Cornell of Fairfield, California, Jared Cornell of Alameda, California, Jimmy Bradshaw of Martinez, California, and Sunny Bradshaw-Work of Tracy, California. He is also survived by his grandchildren, Kellie and Makayla Morano of Twin Falls, Idaho, Samatha Ruge of Reno, Nevada, Maison and Addison Erridge of San Ramon, California Gene was considered a real family man and according to many who knew him did a wonderful job. Eugene "Gene" served in the United States Navy during the Korean Conflict. He opened his own electrical business in California, Morano Electric, and ran it for more than forty years. Gene was a wonderful teacher and taught his son Tony as well as Kathy's son Jared to be very good electricians. He retired in Oregon four years ago and enjoyed being in a leadership position in his church. Gardening was his hobby and he was also an excellent handyman; he could fix just about anything. It was not uncommon for him to be seen helping out various friends with projects of all sorts. He joined the Master Gardeners in 2008 and was studying to be a Master Gardner. He spent many happy hours volunteering at the VA PERC office. A memorial service will be held at the Church of Jesus Christ of Latter Day Saints, Newton Creek Ward, 1864 Calkins Road, Roseburg at 11:30 AM on Saturday, October 2, 2010. A Ceremony to follow the service at the church and will be preformed at Roseburg National Cemetery. In lieu of flowers, donations may be made to The Leukemia & Lymphoma Society,Donor Services,P.O. Box 4072,Pittsfield, MA 01202 .

Eugene (Gene) Nicholas Morano left our world on September 22, 2010. He was born August 8, 1935 in Greenwich, Connecticut. He leaves behind his beloved wife, Kathy, whom he married on November 11, 1978 and children, Tony Morano of Twin Falls,... View Obituary & Service Information

The family of Eugene Nicholas Morano created this Life Tributes page to make it easy to share your memories.

Send flowers to the Morano family.