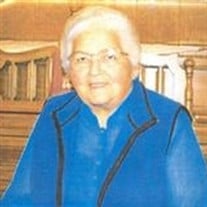 Etta Pauline Williams Age 77, of Lookingglass, Oregon, went to be with her Lord and Savior on Monday, August 1, 2011, known to her family and friends as Ma, grandma and Doodle. Etta was born November 14, 1933, in Chickasha, Oklahoma, to Maurice H. and Ollie B. (King) McCarley. The family moved to Arizona, when she was two years old. Then in 1946, moved to Myrtle Creek, Oregon. She met Harold Williams in 1947 and married him on August 6, 1949. She was 15 years old and Harold was 18 years old. They were married for 57 years. Her greatest joy was cooking for the family after a days work on the ranch and family get togethers. She loved gardening and tending to her flowers. Especially loved her birthday dinners with her brothers and sisters. In the early years she was a stay at home mom when her kids were small. Later she drove school bus for Ellison Transportation. Then she went on to get her G.E.D. and CNA License and worked for 14 years at Rose Haven Nursing Center before retiring in 1994. She was a member of the Lookingglass Church and was devoted to her church family. Survived by her four children, Bill Williams and wife, Wyla, Linda Fuller and husband Willie, Jim Williams and wife, Sheri and Jeanie Vredenburg. And the joy of her life nine grandchildren, Allan, Scotty, Brian, James, Jami, Shawna, Jana, Justin, Nicole, 14 great-grandchildren, Bradley, Trevor, Taylor, Mason, Gavyn, Sophie, Jalee, Jenna, Isaac, Mia, Isaiah, Danielle, Ian, Bailey, brothers and sisters, Muriel Romero, Susie Scott, Gale and Eddie MacDonald, Jim Claudette McCarley, Mahoda Heide and numerous nieces and nephews, aunts and friends. She is preceded in death by husband, Harold, mother and father, Ollie and Hoke, grandson, James and brother, Willie. Etta touched many lives and will be missed by all who knew her. A visitation will be held from 4 p.m. until 7 p.m. on Thursday, August 4, 2011, at Wilson's Chapel Roses, in Roseburg, Oregon. Etta will be laid to rest on Friday, August 5, 2011, with in the grounds of the Lookingglass Cemetery. A memorial service will be held at 11 a.m. on Saturday, August 6, 2011, at the Lookingglass Church.

Etta Pauline Williams Age 77, of Lookingglass, Oregon, went to be with her Lord and Savior on Monday, August 1, 2011, known to her family and friends as Ma, grandma and Doodle. Etta was born November 14, 1933, in Chickasha, Oklahoma, to Maurice... View Obituary & Service Information

The family of Etta Pauline Williams created this Life Tributes page to make it easy to share your memories.