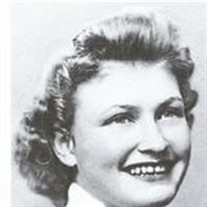 Emilyn Lucille Brown Stevens passed away peacefully on July 28, 2010 after a long and happy life. Preceded in death by her husband of more than 50 years, Robert E. Stevens, she is survived by her three children, daughters, Juliana Bosse (John), Cecily Parks (Greg) and son, Rob Stevens; grandchildren, Jason Klein, Emilee Crabtree and Matt Haines; brothers; Tyrus Brown, Jeremy Brown; and many cousins. Born and raised in Dallas, Oregon, "Emy" as she was known to her friends, attended Dallas High School. She held various jobs in her younger years, including working at The Dorchester House in Lincoln City, Camp Adair in Corvallis and Timberline Lodge at Mt. Hood. There she met and fell in love with Robert (Bob) Stevens. The couple married and moved to Arizona so Bob could finish his college. A country girl at heart, she convinced Bob to return home to the Salt Creek area and settle on Brown Road where she was originally raised. Emy was a wonderful wife, mother, and friend and a loving, supportive, and extremely proud parent. She considered her children to be her greatest achievement in life. Emy was a kind and gentle spirit with a great love for animals and nature. She enjoyed spending hours working in her yard and garden. Her hobbies included quilting, sewing, and crocheting throws that she donated to the homeless. In latter years she volunteered at the Senior Center in Salem, Oregon. At Emy's request no formal service will be held. She will be laid to rest at 1 p.m., August 5th, 2010 in Salt Creek Cemetery near her parents, Harry and Julia Brown, her baby sister, Jacqueline and her loving husband, Bob. Emy was deeply loved by many and will be dearly missed by all who knew and remember her. Her family requests that in lieu of flowers or contributions that you plant a flower in your yard as a tribute to Emy.

Emilyn Lucille Brown Stevens passed away peacefully on July 28, 2010 after a long and happy life. Preceded in death by her husband of more than 50 years, Robert E. Stevens, she is survived by her three children, daughters, Juliana Bosse (John),... View Obituary & Service Information

The family of Emilyn Lucille Stevens created this Life Tributes page to make it easy to share your memories.

Send flowers to the Stevens family.