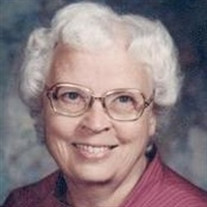 Mary Eleanor (Johnston) Whiting December 7, 1919 - August 25, 2011 Mary Eleanor Johnston was born on December 7, 1919, to Allen Johnston and Eva Laura (Arney) Johnston in Belle Fouche, South Dakota. She attended a small country school with her cousins near Ridgeway, Montana. Eleanor quickly learned how to play a piano after observing her mother give piano lessons to the neighborhood children. Her family moved from their Montana ranch to Colorado Springs, Colorado in 1930 on the advice of their doctor to improve the health of her mother. As her mother's health improved they bought a permanent home in Manitou Springs at the foot of Pikes Peak. She attended Manitou Springs High School and graduated in 1938. Eleanor attended Union College in Lincoln, Nebraska, with a business major. After an extended courtship by mail she married a returning veteran from the European campaign, Melvin Francis Whiting, Feb 10, 1946, in her parents home in Manitou Springs. After their wedding they moved to Walla Walla, Washington, to attend Walla Walla College where they both took business. After Melvin's graduation, they moved to Roseburg, Oregon ,where Melvin worked at Douglas Electric as a cost accountant. Eleanor found work as a bookkeeper for a full service gasoline station and then a lumber mill. Many weekends they could be found camping on the many beautiful Oregon beaches. They especially enjoyed traveling and spent many hours planning their trips. Melvin and Eleanor crisscrossed the USA many times stopping one way or the other to again visit Manitou Springs. Eventually their travels took them to all 50 states including Alaska and Hawaii the most western portion of the US. Eleanor found her real calling when she was asked to join the teaching staff of Roseburg Junior Academy where she was the school secretary and taught sewing and typing. She was an enthusiastic birder and enjoyed teaching her family and students in the art of identifying birds. She was a long time member of the Roseburg Audubon Society and participated in many bird counts. Eleanor retired from Roseburg Junior Academy in 1985 and promptly enjoyed a celebration tour throughout the United States with her husband, Melvin, in their motor home. They later enjoyed a visit to the American Virgin Island of St Croix - for their 50th Anniversary observing the many different species of birds on that island. That trip took them to the most eastern most shore of the United States and its territories. After her beloved, Melvin, died in 1999 she traveled to Puerto Vallarta, Mexico, with her son, his wife and her friend where she enjoyed a horseback to a beautiful remote waterfall at age 81. That horseback trip brought back memories of her of riding her horse to grade school during her girlhood in far off Montana. Eleanor was preceded in death by her husband, Melvin Whiting in 1999, after 53 years of marriage. She will be deeply missed by her only son, Dwane Johnston, his wife June of Fortuna, California, and their two daughters - Julie Wallewein of Colorado Springs, Colorado, and Dana Armstrong of Portland, Oregon. She leaves three great grandchildren - Alex Armstrong, Hannah Armstrong and Kyle Wallewein. The family will be forever grateful to her many friends from Roseburg who visited and helped her through the years and finally the wonderful residents of Forest Glen who befriended her the last two years. She was very much loved and will be greatly missed by all who knew and loved her.

The family of Eleanor N. Whiting created this Life Tributes page to make it easy to share your memories.

Send flowers to the Whiting family.