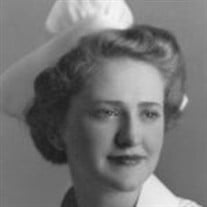 EDITH MARY (CALDWELL) NICHOLS-HART 90, of Roseburg, Oregon passed away Friday October 2, 2009. She was born January 16, 1919 in Tarrytown, New York to Fred Z. and Helen (Duncan) Caldwell. Edith's mother died of tuberculosis soon afterwards, and Edith wasn't expected to live to be twelve. Her father married Agnes who a good stepmother. Edith grew up strong and healthy and graduated from Bayside High School in 1937. She always knew she wanted to be a nurse, and she attended Flushing Hospital School of Nursing, graduating as a Registered Nurse in 1941. Edith was a beautiful young woman, and World War II found her serving as an Ensign Navy Nurse in New York. She met her future husband, Lieutenant Junior Grade, Arthur Harold Nichols, a radio engineer, at a Navy dance in 1942. They were married on December 9, 1943. Edith had to leave the Navy as nurses were not permitted to be married. Edith and Arthur lived in Virginia for a year or so, then they lived in Parkville, Missouri for two years, then they settled in Los Angeles, California until they built a home and moved to Malibu in 1956. They retired in Fallbrook, California. They had four children Mary Lois Nichols (Platts), Carol Caldwell Nichols (Varney), David Arthur Nichols and Gail Helen Nichols (McCart). Other survivors include grandsons Kevin McCart and Jeremy Johnson of Roseburg, Oregon, Brian Nichols and his wife Charlyne of Puyallup, Washington; great grandchildren Kyla Rockwell and Logan David Nichols. Edith was preceded in death by her husband Arthur in 1993, son David in 1999, and brothers William Caldwell and Dick Caldwell. Edith married Paul Hart of Fallbrook, California in 1997. They were both active in the senior community. Later Edith moved to Roseburg, Oregon to be closer to her daughters. Edith always served other lovingly as a nurse, a mother and a caregiver. She sang soprano in church choir and in many concerts. Edith was artistic as an organist and a wood carver and she cared for many animals with love. She loved Jesus Christ and her church and her children. All who knew her loved her as well.

The family of Edith Mary Nichols-Hart created this Life Tributes page to make it easy to share your memories.

Send flowers to the Nichols-Hart family.