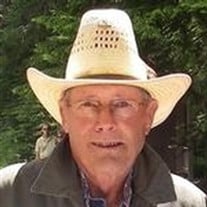 Donald "Don" William Thurston, age 73, passed away in Roseburg, Oregon on September 11, 2011 with his wife Rachael by his side. He was born in Salem, Oregon on May 2, 1938 to Harvey and Winnie Thurston and grew up in the Scio area. Don was a registered professional Land Surveyor and a Certified Water Rights Examiner. Don worked for the Oregon Department of Transportation [ODOT] for 32 years from 1961 to 1992 as a Surveyor, Highway Engineer and District Manager. During his career with ODOT Don worked in Salem, The Dalles, Portland, Lincoln City and Klamath Falls. In 1992 he started Thurston & Associates, Inc, a surveying and engineering firm with his wife Rachael in Klamath Falls. They moved the company to Lake Oswego in 1994. Don retired from Thurston & Associates in 2000 - though he continued to work occasionally on special projects. Since 2004, Don split his time between Lake Oswego and his rural home in Douglas County near Myrtle Creek. Don enjoyed working and caring for their property, preparing a place for family gatherings, watching the wild turkeys, deer and other wildlife and was very proud of the home they built. Don was an active member of Our Lady of the Lake Parish in Lake Oswego. He served with the RCIA program and in various service and liturgical ministries. Don was also a member of All Souls Parish in Myrtle Creek. Don was active with the Knights of Columbus Council # 3818, Assistant Herd Sire for the Lake Oswego Herd of the Order of the Antelope, and a member of the Oregon Hunters Association and the National Rifle Association. Don served as the President of the South Central Chapter of the Professional Land Surveyor's of Oregon. He loved hunting, fishing, camping and hiking and spending time with his family and friends. Don is survived by his wife Rachael Thurston of Myrtle Creek, son Mark Thurston of Stayton, daughter Yvette Fetsch, husband Allan Fetsch of Silverton, Renee Hicks, husband Scott Hicks of Abu Dhabi, daughter Nicole Ellis, husband Greg Ellis of Gold Hill, step son David Braden, wife Jenn Braden of Kapaa, HI, step daughter Melissa Webb, husband Leif Webb of Lake Oswego, step son Micah Braden, wife Amber Johnson of Portland, grandchildren Sasha Ramsey, Shane Thurston, Jonathan Thurston, Heather Smith-Cate, Ryan Hicks, Brendan Hicks, Kelan Hicks, Tyler Ellis, Devan Ellis and Katelin Ellis, step grandchildren Joshua Webb, Olivia Webb, Daniel Webb, Adia Johnson, Lilly Braden and Gabriel Braden and 7 great grandchildren and friends too numerous to list. Don was preceded in death by his parents; Harvey and Winnie Thurston and his sister, Linda Thurston. Don will be greatly missed by all who loved and knew him - may Christ's love enfold him. Don will be remembered as a loving husband, father, grandparent and friend. A Vigil Service will be held on Thursday September 22 @ 7:00 PM at Our Lady of the Lake Catholic Church in Lake Oswego. The Funeral Mass will be celebrated Friday, September 23, 2011 @ 11:00 AM in Lake Oswego, Oregon followed by burial at Sacred Heart Cemetery on Stafford Road. In lieu of Flowers - Contributions can be made to the following charities that were important to Don - Tuition Support - Our Lady of the Lake School Endowment Fund, 650 A' Avenue, Lake Oswego 97034. Help for women and their children: The Father Taaffe Foundation [St Brigid Group Home] 945 Columbia Street NE, Salem, OR 97301-7205. Fighting homelessness: JOIN Connecting the Street to the Home 1435 SE 81st Ave, Suite 100, Portland, OR 97213

Donald "Don" William Thurston, age 73, passed away in Roseburg, Oregon on September 11, 2011 with his wife Rachael by his side. He was born in Salem, Oregon on May 2, 1938 to Harvey and Winnie Thurston and grew up in the Scio area. Don was a... View Obituary & Service Information

The family of Donald "Don" Thurston created this Life Tributes page to make it easy to share your memories.

Send flowers to the Thurston family.