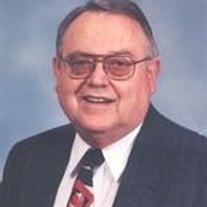 Donald Arthur Dole , 83, of Roseburg passed away in Springfield on February 1, 2011. Donald was born in Aberdeen Washington to Meryl and Viola (Nodine) on August 12, 1927, one of four children. He attended public school in Oregon and Washington and received a BS and LL.B. from the University of Oregon. Donald practiced law since 1951, moving to Roseburg in 1954. He married Lois E. Archibald - Dole on July 30, 1955. He was active in the Roseburg community for many years receiving the First Citizen Award of Roseburg, Oregon in 1980, ran for the State Senate in 1996 for the 23rd district, Special Commission of the Oregon Veterans Loan Program, a member of the Douglas Community Hospital Board of Directors for 16 years and on the Board of the Community Cancer Center for many years. He was also on the Oregon Government Standards and Practices Commission, the Advisory Committee on the Oregon Legislature, Board of Governors for the Oregon State Bar, District and council volunteer for the Boy Scouts of America receiving the Silver Beaver Award for distinguished service to youth. In addition, he was a Community Director of Umpqua Development Corporation, Past President, 1963 and 1964, of the Roseburg Rotary, being a member since 1955. and the Roseburg Office Legal Aid Service of Oregon member. He had many hobbies and memberships including the University of Oregon Alumni Association, Oregon Duck fan, Oregon State Bar, Rancher, Master Gardener, computers, enjoyed Civil War history and was an avid reader. Donald was a active member of the Presbyterian Church and was always concerned about his family. He was a loving husband, father, grandfather, and always put others before himself. Donald is survived by his wife, Lois E. five children, Tom, Jennifer, David, Leanne and Jim, seven grandchildren, Cameron, Shawna, Brandon, Adrian, Ian, Sarah and Bryce along with numerous nieces and nephews. A Celebration of Life will be on February 19, 2011 at 1 PM at the First Presbyterian Church.

Donald Arthur Dole , 83, of Roseburg passed away in Springfield on February 1, 2011. Donald was born in Aberdeen Washington to Meryl and Viola (Nodine) on August 12, 1927, one of four children. He attended public school in Oregon and Washington... View Obituary & Service Information

The family of Donald Arthur Dole created this Life Tributes page to make it easy to share your memories.

Donald Arthur Dole , 83, of Roseburg passed away in Springfield...

Send flowers to the Dole family.