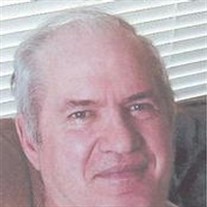 IN LOVING MEMORY OF DENNIS L. BAKER, 75 of Roseburg, Oregon passed away Saturday, March 26, 2011. God saw that Dennis was tired and a cure was not to be, so God put His arms around him and whispered "Come With Me." So with tearful eyes we watched Dennis and saw him fade away; although we all loved him dearly, we could not make him stay. Dennis' golden heart stopped beating, his misery is over; our hearts are broken but we know God only takes the best. Dennis was born September 2, 1935 in Ironwood, Michigan to Norman and Marion Baker. After divorcing, his mother Marion Baker married Russell G. Plant in Michigan. Dennis leaves behind one sister Mary Ellen; niece Dianne; grand nephews Chris and Isaiah all of Roseburg and Sutherlin, Oregon; cousins from all over the United States and numerous friends from Hudson, Wisconsin are Rick and Denyse Hensel and Ken Johnson. Dennis graduated from Hudson High School in 1953 and in 1954 he joined the Army. In 1957, Dennis joined the Air Force and was an aircraft accessories repair technician with the 366th Field Maintenance Squadron, a unit of the Pacific Air Forces headquarters for air operation in Southeast Asia, the Far East and Pacific area. He earned the U.S. Air Force Commendation Medal for meritorious service in Vietnam. After three separate assignments to Vietnam, TSgt. Baker retired from the Air Force in 1974. After retirement, he went to work for Honeywell as a Computer Programmer and retired November 1993. His health declined and was diagnosed with Chronic Progressive Multiple Sclerosis. Dennis moved to Roseburg, Oregon to live and be near his mother, sister, niece and nephew. He was preceded in death by his mother Marion Plant just 8 days prior to his death, and his brother Larry who died in 1955. Dennis enjoyed music, especially gospel and polka music. He played an accordion to patron in convalescent and nursing homes. Dennis also enjoyed playing golf and bowling. He will be remembered as a loving brother, son and uncle. Dennis was a caring and loyal friend, kind and generous to anyone who needed a helping hand. He will be greatly missed, but now without misery he will dwell in the House of Our Lord forever. At his request no service will be held. Private inurnment will be within the grounds at Roseburg National Cemetery.

IN LOVING MEMORY OF DENNIS L. BAKER, 75 of Roseburg, Oregon passed away Saturday, March 26, 2011. God saw that Dennis was tired and a cure was not to be, so God put His arms around him and whispered "Come With Me." So with tearful eyes we watched... View Obituary & Service Information

The family of Dennis L. Baker created this Life Tributes page to make it easy to share your memories.

Send flowers to the Baker family.