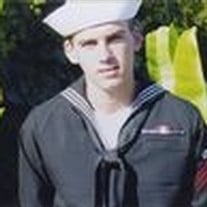 David Micheal Mudge was a hero, not because he served his country in the United States Navy working on ship's diesel engines to help the fight of drugs off our southern borders or even because he kept things going to protect ocean vessels in North Africa against pirates. Not because he was diligent and knowledgeable keeping his head held high and attaining the rank of 3rd Class Petty Officer in a short time. David was a hero because of the way he lived his life. Being the fifth of seven siblings he could have easily been lost in the crowd. Instead, David always made the best of every opportunity that was handed to him. As a child paperboy for the News Review in Roseburg , Oregon , David won a new bicycle for his efforts above and beyond all the other deliverers. David went from bicycles to cars, which he loved to tinker with and make them go faster and handle better and then to the Navy where he learned to work on diesel engines. While performing his duties aboard the USS Rentz in port in the United Arab Emirates , David was accidently electrocuted and died on November 28, 2009. He was on loan from his home ship the USS McClusky on temporary assignment. David is survived by two older sisters, two older brothers, one younger brother and one younger sister in this order: Sarah Washburn - 30, Brian Mudge - 28, Curtis Mudge - 26, Allison Tomlinson - 25. On June 12,1987, David was born and in just 22 years traveled most of the way around the world east and west, north and south making friends everywhere he went and becoming a strong shoulder for many to depend on. Brother Jedidiah Mudge 19, and sister Angelicia Mudge 17, came later. All were very close and more respectful of each other than any family I personally have ever known. Jed and Angie looked up to David as a mentor and protector but it wasn't long before his whole family began to look up at him standing 6' 3" tall. He reminded me of a sapling that you watch and watch for the longest time; then all of a sudden you look up and it has become full grown, strong and tall. David's seven nieces and nephews looked up to him too because he would always make time for them. He was proud to be an uncle and wanted to enjoy it as much as possible. To David, family was extremely important and you didn't have to be a friend very long before he considered you family. David was also survived by his maternal grandparents. Bill and Beverly Mix, his dog, Clifford and more aunts, uncles, cousins and friends than most people could even cope with. He managed to leave a favorable impression on each and every one of them. David was a hero for standing firm in what he believed in which was family, friends and animals and he was there for any or all who needed him. David's father and mother, Larry and Judy Mudge would like to give thanks to all who came out to support David and the family in this time of great pain. From the U.S. Navy, Oregon Governor Kulongoski, Douglas County Sheriff's Department, Roseburg Police Department, the citizens of Roseburg and surrounding areas and The Patriot Guard Riders and all the rest of you who helped us honor David. Please know that you were a great blessing to us. Thank you for honoring David in his passing but please do one more thing to honor him in your life. Love your families, lend a hand to your friends and consider every stranger a friend. You won't believe what a joy you will receive in return.

David Micheal Mudge was a hero, not because he served his country in the United States Navy working on ship's diesel engines to help the fight of drugs off our southern borders or even because he kept things going to protect ocean vessels in... View Obituary & Service Information

The family of David Michael Mudge created this Life Tributes page to make it easy to share your memories.

David Micheal Mudge was a hero, not because he served his country...

Send flowers to the Mudge family.