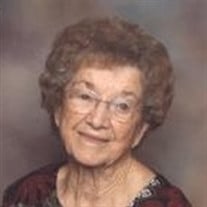 Mrs. Clara V. "Potter" (Gaston) Martin Age 96, of Glide, Oregon, passed away on Monday, April 18, 2011, in Roseburg, Oregon, and lived in Oregon for 58 years and previously lived in Idaho. She was born on October 29, 1914, in Nebraska, to parents, Walter & Minnie Gaston. She worked for Dr. Boyd as a dental assistance for many years after moving from Pendleton, Oregon, when Dr. Boyd retired she went to work for Dr.'s Donahoo and Young. She enjoyed crocheting, making dolls, reading and growing African violets, roses and Christmas cactuses. She was active with the Sutherlin Senior Center for several years and babysat in the nursery at the 1st Baptist Church on Lane St. for eight years when her grandchildren were young. She was a member of Church on the Rise. She is preceded in death by spouses, Orvil Potter, 52 years, deceased in 1986; Frank Potter, seven years, deceased in 1994; Chester Martin, three years, deceased in 2004. She is survived by daughters, Virginia Gilbert, Ernie and Marilyn Oestman, Fred and Step-daughters, Rita Reiger and Lois VanDeusen, John. Grandchildren, Yvonne David, Ernie Gene Gilbert, Clara Bradley, Wes Oestman, Warren Oestman, Phyllis Ward, Lorene Tabor, Malora Smith. 25 Great-grandchildren and niece, Jolynn Woods She is preceded in death by Leonard Gaston-brother, Galen Gaston-nephew, Frank Potter, Jr.-step-son, Ginger Prater-granddaughter. A funeral service will be held on Thursday, May 5, 2011, at Church on the Rise at 1 p.m. with Pastor, Mark Bodenstab officiating. Memorial contributions may be made to, Church on the Rise Children's Camp Fund Special thanks to: Amedisys Hospice and Homecare and Lisa's Loving Care.

The family of Clara Virginia Martin created this Life Tributes page to make it easy to share your memories.

Send flowers to the Martin family.