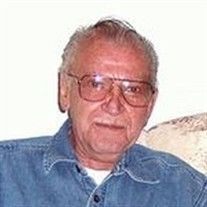 Charles Anderson (Chuck) Cantwell, Husband, Father, Father-in-law, Grandpa, Great Grandpa, Uncle, Brother and Friend, passed away peacefully in his sleep at his home on Saturday morning 10/30/2010. Chuck was born March 15, 1931 in Miami, Oklahoma, the son of William and Nellie (Wiles) Cantwell. On December 12, 1958 Chuck married the love of his life, Barbara Ann Pichette. They were married just shy of 52 years. Chuck spent 37 years at the Roseburg Lumber Plywood Plant in Green, starting work there when it was National Lumber. Chuck liked to bowl, play pool, hunt, fish and share hunting and fishing stories. He even liked to go to Barbara's class reunions and enjoyed going to relax at the coast, but he really loved spending time with his family. He was preceded in death by his parents, brothers Dick and Bill Cantwell, sister Wanda Hurtt, and a brother-in-law Jimmy Pichette. Chuck leaves behind his wife, Barbara, daughter Linda Moore and her husband Danny of Roseburg, son; David Cantwell and his wife Rhonda of Oakland, Oregon, daughter; Teresa Marshall and her husband Don of Oakland. He also is survived by his grandsons; David Bennett and his wife Jamie of Winston, David Cantwell Jr. and his wife Jennifer of the Winston area, Allen Wellborn of the University of Wyoming at Laramie, Mike Marshall and his wife Christy of Beaverton, Dan Marshall and his wife Sarah of Bend, Michael Moore and his wife Jodi of Tualatin, and granddaughters Tori of Texas, Marly Sexton and her husband Donnie of Wilsonville. Also great grandchildren D.J. and Kiera Bennett, Kierstin Marshall, Daniel and Kayli Sexton, Gavin, Braden and Jaron Moore and Emerie Cantwell. Sisters Betty Brown of Vancouver, Washington, Evadean Matile and her husband Ralph of Gladstone, Joyce Wooten and her husband Herb of Portland, brother-in-law David Pichette and his wife Nancy of Oakland, Sister-in-law Judy Livingston and her husband George of Alabama, a sister-in-law Micki Pichette of Coos Bay, numerous nieces, nephews and very best friends K.C. and Diana Watson of Roseburg. Those of us who knew and loved Chuck will miss him greatly and he will be forever in our hearts.

The family of Charles A. Cantwell created this Life Tributes page to make it easy to share your memories.

Send flowers to the Cantwell family.