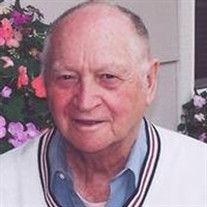 Rev. Charles Ward Batson, 89 of Roseburg, Oregon passed away peacefully from this life on Saturday, July 16, 2011. He was born November 18, 1921, the 12th of 13 children to Andrew Jackson and Mary Elizabeth "Betty" (Lee) Batson. He was raised and attended school in the Bellsburg community of Dickinson County, Tennessee. Charles accepted Jesus as his Savior at the age of 15. At the young age of 17, he felt the call of God to become a full-time minister and was later ordained in the Church of God. He began speaking as an evangelist and traveled with a close friend and fellow ministers, Davis and Marie Rogers. After a time, he ministered with his future brother-in-law Harper Hunter, Jr. On September 9, 1944, Charles and his childhood sweetheart, Edith "Helen" Hunter eloped. She joined Charles and Harper Jr. in their traveling ministry. When Harper married Betty Williams, they became a quartet of singer, musicians and ministers. They traveled throughout the United States until the birth of Charles and Helen's son Alfred Dennis and then the couples went into other ministries. While pastoring in Beloit, Wisconsin, their first daughter Beverly LaVonne was born. A year later in Birmingham, Alabama their second daughter Jarenda Gale was born. Throughout his ministry Charles served as a pastor, evangelist, State Overseer, was on the board of Northwest Bible College and was a camp meeting speaker in 49 of the US States and Canada. Charles was a great Southern gospel piano player and had a beautiful tenor voice. A couple of his favorite songs that he sang during revivals were "Harvest Time" and "We'll Talk it Over in the Bye and Bye". While in the mid-west, as time permitted, Charles would go to the lakes and rivers to fish. In Oregon, he enjoyed camping, breeding Boston Terriers and raised amazing gardens. If you came to visit him, you would usually be sent home with some tomatoes, green beans or his beautiful raspberries. He retired from his last pastorate in Salem, Oregon and moved to Roseburg where he served as Pastor to the Seniors of the Church of God. It was a ministry he and Helen truly loved. Both of them never really retired from the ministry. Charles was always concerned with the lost souls and continued to witness of Christ's grace wherever he wason a bench at the hospital or to the other residents at his foster care home. Charles was preceded in death by his parents and his siblings Andrew Jr., Frank, Clarence, Lily, Mary, Lela, William, Christine, Imogene and Carl. Survivors include his wife of 67 years, Helen of Roseburg, Oregon; son Dennis (Faye) Batson also of Roseburg, Oregon; daughters Beverly Peterson (David) of Salem, Oregon and Jarenda Peterson (Garret) of Haynes, North Dakota; brother Bruce Batson (Katherine) of Ashland City, Tennessee; sisters-in-law Beatrice Batson (William) of Nashville, Tennessee and Betty Hunter (Harper) of Cleveland, Tennessee; 9 grandchildren, 16 great grandchildren, 3 step-great grandchildren; numerous nieces, nephews and cousins. The family would like to express our appreciation for support from Pastor Doyle and Charlene Pooler and for the wonderful care he received at the Peterson Place Foster Home from Mary, Rose, Kavron, Kristin and Courtney. We would be amiss if we did not mention the attentive care dad received from Dr. Wm. Bradley Townsend and his staff as well as the staff of Amedisys Hospice. Those who wish may pay their respects on Wednesday, July 20, 2011 from 11:00 am until 4:00 pm at Wilson's Chapel of the Roses. A memorial service will be held Thursday, July 21, 2011 at 2:00 pm at the Roseburg Church of God on NE Stephens. A memorial has been established to the Ministerial Student Emergency Fund at Lee University. Donations may be sent to: Central Gifts, Lee University, P.O. Box 3450, Cleveland, TN 37320.

Rev. Charles Ward Batson, 89 of Roseburg, Oregon passed away peacefully from this life on Saturday, July 16, 2011. He was born November 18, 1921, the 12th of 13 children to Andrew Jackson and Mary Elizabeth "Betty" (Lee) Batson. He was raised... View Obituary & Service Information

The family of Charles Ward Batson created this Life Tributes page to make it easy to share your memories.

Send flowers to the Batson family.