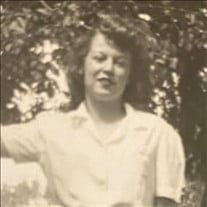 Billie Reed Cowbrough, 93, passed away Jan. 29 at Arbor Oaks Terrace in Newburg. Billie is survived by two daughters, Kelly Neely, Newberg; Robin McDowell, Gladstone; and by two sons, Chris Cowbrough and Scott Cowbrough, both of Colville, WA. Billie is also survived by four grandchildren and four great-grandchildren. Billie was born in Grand Junction, CO. on Feb.3, 1928 to Bruce and Ruby Reed. The Colorado cowgirl was the youngest of four sisters. She resided in western Colorado until age 19 when she moved to Cottage Grove, where she resided for one year before relocating to Elkton. Through mutual friends, Billie met Bob Cowbrough, a handsome local public accountant who could always turn the double play and hit for average. It was said at the time that Bob was the most eligible bachelor in town. The young couple moved that fall to Roseburg, where Bob opened what would ultimately become a thriving and successful accounting practice. Billie would start a decades-long job as mother and house manager. Billie had myriad talents and interests. Resourceful by nature, the "Barber of Charter Oaks" was a neighborhood baking legend. Her summer and fall blackberry pies were always a sought after hit with the young people who regularly frequented the "Hub of Charter Oaks." Billie was a talented seamstress who created everything from wedding dresses and gowns to a Beaver costume for a school centennial celebration. Her culinary skills were often understated but always appreciated. She had a passion for lifelong learning. Billie was a voracious reader and even found time to serve as a precinct committeewoman for many years. In later years, she took an avid interest in genealogy, volunteering her time with the Genealogical Society of Douglas County. She spent the last decade of her life in the Tigard and Newberg areas. It was Billie's wish that there be no memorial service. Wilson's Chapel of The Roses has been entrusted with the arrangements.

The family of Billie Jo Cowbrough created this Life Tributes page to make it easy to share your memories.

Send flowers to the Cowbrough family.