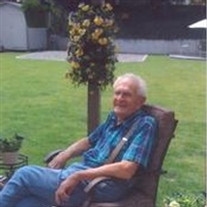 Age 93, of Roseburg, Oregon passed away on February 28, 2011 of congestive heart failure. He was born to Joseph and Alberta Fiddy in San Francisco on February 13, 1918. He was a Douglas County resident for 58 years. Dad came to be known by his sons as Buddy and he was our Buddy. He lived in Oakland, California. He made first trip to Oregon in 1931 as a youth, crossing the Winchester Bridge. 20 years later, he moved his family to Myrtle Creek, OR. He served in the Army in Radio Communications in the European Theater, England, France, Germany, Belgium etc. He worked for Hanna Nickle for 22 years and retired from Douglas County Parks after 10 years in 1988. He enjoyed Ham Radios, painting with oils, taking Sunday drives every day of the week, he loved seeing the wild turkeys out on Douglas Street and Hwy 99 North. Dad loved to travel, hunt and fish the North Umpqua. He traveled to Europe, Panama Canal, Hawaii and Mexico. Dad parasailed at age 80 and 81. Dad loved camping at Susan Creek for over 40 years. He taught all of us: sons, grandsons and granddaughters, to fly fish there. Dad would say "One for the money, two for the show, three to get ready, four lets go!" He was preceded in death by his wife of 41 years, Louise Fiddy in March 1981 and by his wife of 21 years, Alvina Fiddy in July 2004 and all of his brothers and sisters. One brother who was most dear to us was Theodore Fiddy, who preceded dad in death in October 2005. He is survived by his sons, Gary Fiddy and wife Sheryl; Barry Fiddy and wife Rose; Joseph Fiddy and best friend Karen Page; stepdaughter, Beckki Smith and husband Dan Jollif and son Keenan; stepson Mike Fitch and wife Mary and son Rowen; grandchildren: Julie Jackson; Gary Fiddy Jr.; Maria DeVecchio; Brent Fiddy; Jacob and Candyce Fiddy; great-grandchildren: Gabrielle Jackson; Garret Fiddy; Mackenzie and Tamra Fiddy. There will be no service held at dad's request.

Age 93, of Roseburg, Oregon passed away on February 28, 2011 of congestive heart failure. He was born to Joseph and Alberta Fiddy in San Francisco on February 13, 1918. He was a Douglas County resident for 58 years. Dad came to be known by his... View Obituary & Service Information

The family of Bertram H Fiddy created this Life Tributes page to make it easy to share your memories.

Send flowers to the Fiddy family.