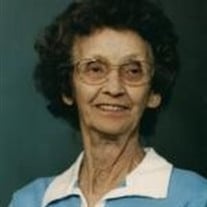 Avis Marie (Tilbury, Voss) Boehnen passed away peacefully at her home, with family by her side, on Tuesday, January 25, 2011. She was 87 years young. She was born on April 18, 1923 to George and Hazel (Bates) Tilbury, in Canby, Minnesota. She was raised in Huron, Manchester and DeSmet, South Dakota. She married Larry Voss, and they had three boys, Dennis, Mike and Terry. After Larry's death, she met and married Willie Boehnen in Huron, South Dakota. They had three sons, Rick, Tom and Randy. After Willie's death, she met Rick Turner and they spent the next 30 years together. Avis worked as a waitress until she retired. She enjoyed dancing, going to garage sales and watching professional wrestling on tv. She really enjoyed taking trips with her sisters. She possessed a great sense of humor and was a hard worker. She also did a great job of raising her six sons. Above all else, she loved her family. She had a heart of gold, and those she loved never wanted for anything. Avis is survived by her sons, Dennis Voss of Santa Margarita, California; Mike (Pam) Voss of Myrtle Creek, Oregon; Terry (Renee) Voss of Oregon City, Oregon; Rick (Joanne) Boehnen of Roseburg, Oregon; Tom (Debbie) Boehnen of Roseburg, Oregon; and Randy Boehnen of Roseburg, Oregon. She is also survived by numerous grandchildren and great-grandchildren. Avis is also survived by her sisters, Edith Nelson of Rapid City, South Dakota; June Hoeye of Sioux Falls, South Dakota; Helen Button of Mitchell, South Dakota; and Carol (Dan) Mckillop of Gillette, Wyoming. She was preceded in death by her parents, George and Hazel Tilbury; sisters Eva Terry, and Delores Carr; brothers Clifford Tilbury and Gerald Tilbury. She was also preceded in death by Richard Turner and stepdaughter Lana Turner. The family would like to say a special thanks to everyone at Amedisys Hospice, who helped Randy, Joanne and Rick take such great care of mom. They would also like to thank Tami Turner for helping with mom's care. Also, thank you to Phyllis for doing mom's hair. Mom, we love you and will miss you very much. You were the best mom anyone could have. Services will be Saturday, January 29, 2011 at Wilson's Chapel of the Roses at 1:00 PM in Roseburg, Oregon.

Avis Marie (Tilbury, Voss) Boehnen passed away peacefully at her home, with family by her side, on Tuesday, January 25, 2011. She was 87 years young. She was born on April 18, 1923 to George and Hazel (Bates) Tilbury, in Canby, Minnesota. She... View Obituary & Service Information

The family of Avis Marie Boehnen created this Life Tributes page to make it easy to share your memories.

Send flowers to the Boehnen family.