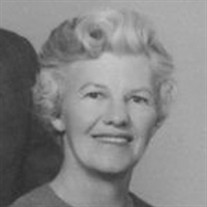 Audrey Margret Olson Young Born April 10th, 1913, was the sixth, of nine children born to Andrew and Selma Olson, in Monroe, Washington. Audrey's enduring pride as a first generation Swedish-American, and love of anything "Swedish", was evident throughout her lifetime. A trip to Sweden in 1972, to research family genealogy and to meet with relatives of the Olson and Swanson families, was a realization of a girlhood dream. Audrey's active imagination and keen intellect were evident from an early age. 1930 saw her graduate, as class valedictorian, from Monroe High School. Following graduation, Audrey worked for a year as a bank teller before attending the University of Washington. To pay for room and board, she worked as a live in "family's helper) and, as a lunch counter waitress to pay for books, in her freshman and sophomore years. In her junior and senior years, she pledged Beta Gamma Sigma and worked on campus, in the business department. As one of only two women in the advanced accounting class of 62 students, she graduated Cum Laude, in 1935, with a degree in Economics and Business. The Olsons were to see five, of their nine children graduate from the University of Washington, each one, helping the next, with tuition as they gained employment upon graduation. After graduation, Audrey was introduced to Harry Young, an UW engineering and forestry student, by her younger sister, 'Tim", who, as it happened, was dating Harry's roommate. It was their first date at the Trinion Ballroom, in Seattle, when they discovered a shared love of ballroom dancing, something they joyfully pursued throughout their lifetimes. Harry and Audrey were married on May 9, 1942, in a simple garden ceremony at the home of Nels and Ellen Lindh, (her sister) in Snohomish, Washington. The marriage lasted sixty seven years, ending just 33 days before her own death, on November 4th, 2009, with the passing of Harry, on October 2nd. Audrey was an integral part of the eventual success of Harry's decision to form the Young Logging Company. With her strong business background, as office manager, and the partnership expanding to include, Jack and Evelyn Young, and Don Brown, the company grew to become YBY Corporation., including divisions in Roseburg, Bend, Oakridge and Sitka, Alaska, from their home based operation, in Glide. The community of Glide was important to the Young family and they were loyal in their support of the schools, youth sports and civic organizations of the area. They lived nearly fifty years, in the home Audrey designed, on the banks of the North Umpqua River. One of Audrey's consuming interests was the love of the outdoors, in particular, the beautiful and rare wild flowers she cherished, nurtured and protected in her own flower gardens. It was this interest that sparked enduring friendships with Reggie Miller and Mona Riley. From that shared passion, the first, modest effort of an organized showing was the beginning of what later became The Glide Wildflower Show. www.glidewildflowershow.org Audrey's success and talent included prolific writings, sculpture, photography, carving, weaving, collecting and painting, the results of which are now family treasures. Audrey is survived by her sons, John and wife, Mary, of Atoka, Tennessee, and Stanley and wife, Linda, of Glide, Oregon; grandchildren, Cindi Odum of North Carolina; John E. Young of Virginia; Kirstan Withers and husband, Lynn, of Roseburg; Erik Young and wife, Angela of Medford, Oregon; five great-grandchildren, Danielle Odum; Savana Young; Blake Withers; Daniel Withers and Aidan Young. Audrey is also survived by one sister, Jean Lindsey, Chehalis, Washington, and many nieces and nephews. Although her final years were lost to us all, as a result of her struggle with dementia, her spirit remained undefeated. The family would like to especially acknowledge, and is so appreciative of, the loving and diligent care provided Audrey by the staff of Callahan Court. Services are planned for Wednesday, November 18th, 2009, at 11am, at Wilson's Chapel of the Roses. In lieu of floral tribute, the family requests honorariums in her name to be pledged to The Glide Wildflower Show, P O Box 332, Glide, OR 97443, who continues the tradition of the wildflower show.

The family of Audrey Margaret Olson Young created this Life Tributes page to make it easy to share your memories.