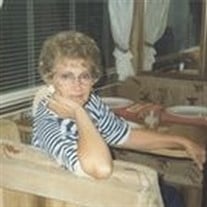 Alice Vietta Anderson passed from this life to the next on October 7, 2010 in Roseburg, Oregon. Alice was born April 18, 1923 in Columbia Falls, Montana to James and Mary Murphy. Alice moved to Roseburg where she met and married her husband, Paul Anderson of Elkton, Oregon, in June 1948. He died as the result of a logging accident in 1968 leaving her a widow at 45 years of age. She spent the next 42 years as a capable and independent woman who provided a loving and stable home for herself and her three children. Alice was employed by the Forest Service in Glide before working as a secretary to four different superintendents in the Glide School District. Alice retired in 1984 and spent many years following her passions of gardening and painting. Alice loved nature and that was reflected in her paintings and the many hours devoted to feeding the birds and tending her garden. Alice was preceded in death by her parents, James and Mary Murphy, a sister Teresa Murphy, four brothers William, Frank, Dick and Bob Murphy as well as her husband Paul. Alice is survived by her sister, Helen Thomas, of Yakima, Washington, a brother, Phil Murphy, of Myrtle Creek, Oregon and sister-in-law Bonnie Murphy of Salem, Oregon. She leaves her three children who will miss her very much, but are happy that she is again reunited with her husband. Her children are Dale Anderson and his wife Susan of Glide, Oregon, Paula Harryman and her husband Jerry of Glide, Oregon and Mary Ortega and her husband Craig of Hood River, Oregon. She was very proud of her grandchildren: Paul Harryman of Corvallis, Oregon, Mark Harryman of Corvallis, Oregon, Eric Harryman of Bend, Oregon, Sarah Anderson of Santa Cruz, California, Luke Anderson and his wife Rose of Glide, Oregon, Mari-Beth Guenther and her husband, Joe of Hood River, Oregon and Alyssa Ortega of Hood River, Oregon. She is also survived by many nieces and nephews. The family thanks Lisa and Larry Schrader of Lisa's Loving Care in Roseburg for taking such good care of mom during the last few months of her life, Dr. Jennifer Micek and Amedisys Hospice Care for their guidance and help in the weeks preceding her death. The family also wishes to thank Pat Tresselle who not only provided spiritual support to Alice, but became a treasured friend as well. Graveside services will be held at the Kellogg Cemetery near Elkton, Oregon as Alice wished. In lieu of flowers, donations may be made in Alice's memory to Doernbecher Children's Hospital. Wilson's Chapel of the Roses is in charge of arrangements

Alice Vietta Anderson passed from this life to the next on October 7, 2010 in Roseburg, Oregon. Alice was born April 18, 1923 in Columbia Falls, Montana to James and Mary Murphy. Alice moved to Roseburg where she met and married her husband,... View Obituary & Service Information

The family of Alice V Anderson created this Life Tributes page to make it easy to share your memories.

Alice Vietta Anderson passed from this life to the next on October...

Send flowers to the Anderson family.